One of the most frequent questions I get (as well as points of disagreement) involves maps.

Everyone is trying to figure out Book of Mormon geography by reading the text and referring to satellite maps. As I pointed out in Moroni's America, this can be helpful in some ways, but there's no reason to think that Mormon and Moroni had satellite imagery. They lived on the ground. They didn't have airplanes, let alone satellites. It's a completely different perspective, one that modern people probably can't even understand because we're so used to viewing the Earth from the top down. We project maps onto the surface even when we try not to.

As a result, the reliance on modern maps raises expectations that cannot be met. (And I realize I used them in Moroni's America. Like everyone else, I want to relate to the text in terms of modern geography. But I don't think we can get an accurate geography using modern maps, at least not accurate in detail. The overall picture seems pretty clear to me, but when we get down to where someone crossed a river or where a particular battle took place, we're raising expectations that have no sound basis either in the text or in terms of modern geography.)

Another factor: neither Mormon nor Moroni personally visited every city mentioned in the text. Many of the cities were destroyed, as recorded in 3 Nephi, hundreds of years before Mormon and Moroni wrote their portions of the plates. Maybe they had maps to refer to, or maybe they only had written explanations that were not a lot more detailed than what they left in their own accounts. I think that's one reason why they used such vague terminology.

Yet another factor is that landforms change over time. Besides the destruction described in 3 Nephi, rivers frequently change course. 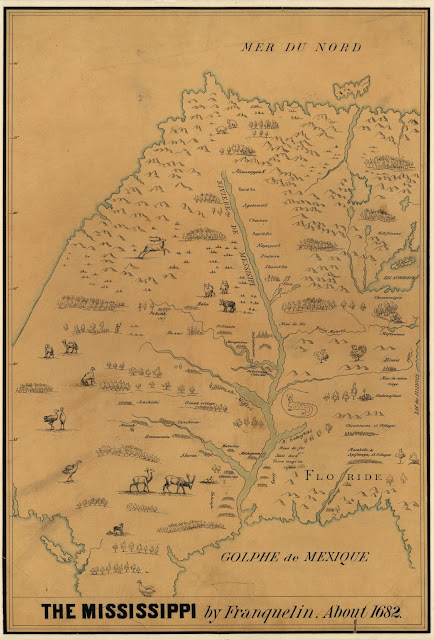 Here's an example of a map of the Mississippi River from 1682, drawn by Franquelin, a Frenchman. You'll notice it's not even close to what our satellites show.

Let's say an individual writing the history of this region had only this map to go by. No matter how well he/she described the terrain and the relative distances and directions, we would not recognize the setting in today's world.

There are some interesting features if you look closely.

Franquelin noted iron mines and lead mines along the river. He depicted the body of water at the top, which we call Lake Michigan today, as "Mer du Nord," or Sea North.

I'm not saying or implying that this is the Sea North referred to in Helaman 3:8, but I am pointing out two things here.

First, the term "Sea North" is not a proper noun but a relative term, which is how I think Mormon used similar terms in the Book of Mormon.

Second, this map was the most accurate representation Franquelin could come up with, based on the information he had. We now know that Lake Michigan does not extend this far west and that the rivers are much different from what he showed here, but that doesn't mean Franquelin was lying or trying to deceive anyone. We can assume he used his best efforts, despite the imperfections in this map. 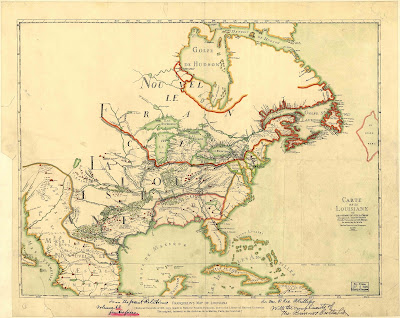 It is difficult today to figure out which tributaries Franquelin was showing. The Mississippi River today looks almost nothing like what he showed in this map.

Two years later, Franquelin drew another map. This one shows the Mississippi entering the Gulf of Mexico from roughly where Corpus Christi, Texas, is today. The New Orleans area is shown as a bay, not the mouth of a river.

With respect to the Mississippi entering the Gulf of Mexico, Franquelin's earlier map was more accurate. But instead of the wildly speculative Sea North, he showed the Great Lakes much as we know them today. He even showed the northern extension of Lake Huron to what we now call the French River. This once-navigable extension used to be a passage to the St. Lawrence Seaway but is now marshland.

This map also identifies an interesting feature not far from the Hill Cumorah in New York. Franquelin labels it "Fontaine d'eau qui brule," meaning "Fountain of water that boils."
____________________

The point here is that I think we need to be careful in assessing the geography passages of the text and consider the circumstances in which someone writing around 400 A.D. would be in as he abridged the records that, to him, were already ancient. These maps from 1682 and 1684 are only 330 years old. Mormon was dealing with maps (or, even worse, verbal descriptions) that were older than that to him.

Moroni noted the text contained imperfections. He also wrote that "if there are faults they are the mistakes of men."

This is another reason why I propose we start with the known pin in the map--the Hill Cumorah in New York--and sort through the text from there.

And that's why I think any map that puts Cumorah somewhere else, whether in a real-world setting or in an abstract setting, is hopelessly compromised and inherently misleading.