Why scholars oppose the prophets

We might think that the answer to Book of Mormon geography/historicity is to accumulate all the facts and apply the best reasoning. It seems logical that the best informed and "smartest" people would most easily reach agreement on issues. After all, facts are facts; the more facts we have, the closer we should be to the truth, and the better trained and the smarter we are, the better we should be able to understand and apply the facts.

But in real life, it doesn't work out that way.

In her book, The Influential Mind, Tali Sharot makes this observation after summarizing experiments in which those people who were the most analytical were the worst at assessing data:


These findings debunk the idea that motivated reasoning is somewhat a trait of less intelligent people. To the contrary, the greater your cognitive capacity, the greater your ability to rationalize and interpret information at will, and to creatively twist data to fit your opinions.

Ironically, then, people may use their intelligence not to draw more accurate conclusions but to find fault in data they are unhappy with. This is why, when arguing with others, our instinct for offering facts and figures that support our views and contradict theirs may not be the optimal approach. Even if the person in front of you is highly intelligent, you may find it difficult to change their mind with counterevidence. (p. 24, emphasis added)

Really, this should be obvious to Latter-day Saints. The people we should trust the least are the intellectuals, especially when they say the prophets are wrong.
_____

The fundamental question about Book of Mormon geography is whether we follow the prophets or the intellectuals and scholars.

President Benson warned,  "The learned may feel the prophet is only inspired when he agrees with them, otherwise the prophet is just giving his opinion—speaking as a man..."

There are lots of reasons why the "learned" (the scholars, intellectuals, etc.) prefer their own ideas over those of the prophets. I've discussed these previously in a series of posts, including this one:
https://bookofmormonwars.blogspot.com/2018/03/m2c-technique-2-using-sophistry-to.html

When we see how vigorously the intellectuals fight against the prophets' consistent and persistent teachings about the New York Cumorah, we see an excellent example of what Shaort observes in her book.

This is how we end up with employees at BYU, CES, and the Church Departments convincing members of the Church that the prophets are wrong. No amount of evidence can or will persuade them otherwise. Every teaching of the prophets that contradicts the views of these intellectuals will be rationalized away.

But members of the Church who follow the prophets accept the New York Cumorah. Then they are open to all the corroborating evidence that is coming forth.

The only possible consensus about Book of Mormon geography/historicity lies in acceptance of the unambiguous, clear, persistent and consistent teachings of the prophets.
Posted by jonathan3d at 12:56 PM 1 comment:

One of the great insights in the Book of Mormon involves the persistence of traditions and how people and societies preserve traditions through confirmation bias.

The classic example is the narrative of Nephi and his brothers. According to Nephi, leaving Jerusalem and taking the brass plates was God's will. According to Laman, the people of Jerusalem were righteous and Nephi was a usurper. Both sides cited the same facts, but had entirely opposite interpretations.*

These interpretations became the traditions, or narratives, that separated the Nephites from the Lamanites for centuries.
_____

Today in the Church there are two traditions, or narratives, that cause division among Church members regarding the Book of Mormon. The persistence of this division causes confusion among youth, missionaries and investigators.

It's time to resolve this.

Tradition A teaches that the prophets have been wrong about the New York Cumorah.

Tradition B teaches that the prophets have been correct about the New York Cumorah.

Tradition A is taught by BYU, CES, and the Departments in COB (the Church Office Building, such as the History, Correlation and Missionary Departments). It has never been taught in General Conference or by any prophet or apostle.

Tradition B is taught by various individuals, but is actively opposed by BYU, CES, and COB. It has been consistently taught by the prophets and apostles, including in General Conference, and has never been repudiated or even questioned by any prophet or apostle.

Tradition B claims the prophets and apostles who taught the New York Cumorah were correct and that it is the intellectuals who are expressing their own opinions and are wrong.

It's easy to see the origins of Tradition B. Start with Letter VII and then read the teachings of the prophets and apostles.

It's not as easy to see the origins of Tradition A because it developed over time. It is not easy to persuade active, faithful LDS that the prophets and apostles are wrong. Even after decades of concerted effort through CES, BYU, and COB Departments, the M2C intellectuals have not persuaded all members of the Church that the prophets were wrong. In fact, the tide may be turning.

I've addressed these origins before, such as here (https://bookofmormonwars.blogspot.com/2018/04/why-m2c-intellectuals-persist.html), but it isn't the origins that matter.

The Zoramites explained their rejection of the traditions of their fathers this way:

Helaman 5:19 shows that it is possible for people to reject false traditions.

Therefore they did speak unto the great astonishment of the Lamanites, to the convincing them, insomuch that there were eight thousand of the Lamanites who were in the land of Zarahemla and round about baptized unto repentance, and were convinced of the wickedness of the traditions of their fathers.

To reach unity on this topic, the only solution is to accept the teachings of the prophets and apostles, which means rejecting the false tradition A that repudiates those teachings.

The question is, how many M2C intellectuals are capable of doing this? How many are willing to?
_____
* Zeniff explained this well in Mosiah 10:

13 And again, that they were wronged while in the land of their first inheritance, after they had crossed the sea, and all this because that Nephi was more faithful in keeping the commandments of the Lord—therefore he was favored of the Lord, for the Lord heard his prayers and answered them, and he took the lead of their journey in the wilderness.

15 And again, they were wroth with him when they had arrived in the promised land, because they said that he had taken the ruling of the people out of their hands; and they sought to kill him.

16 And again, they were wroth with him because he departed into the wilderness as the Lord had commanded him, and took the records which were engraven on the plates of brass, for they said that he robbed them.

Elder Holland and the importance of place

There should be a consensus that a site becomes sacred because of what happens there. Modern prophets have repeatedly identified the Hill Cumorah in New York as such a sacred site. Those who say it doesn't matter where the Book of Mormon took place are denying the significance of sacred sites. Would they also say it doesn't matter where Jerusalem was? 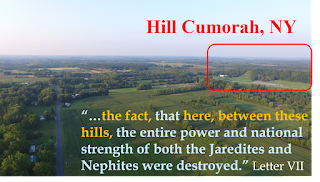 When I was in Palmyra, New York, last week, I walked quite a bit through the battlefield west of the hill Cumorah.  Latter-day prophets have spoken and written about the importance of that site because both the Jaredite and Nephite civilizations were extinguished there.

It is also a sacred space because it is where Mormon and Moroni wrote much of the Book of Mormon, including the final chapters of the text.

Elder Holland is accompanying President Nelson on his trip around the world. Their second stop was in Jerusalem. They emphasized the importance of place in choosing the itinerary. One article explained it this way:

Elder Holland said President Nelson "decisively and instantly" determined that his first major gesture beyond LDS Church headquarters would be a visit to Jerusalem.

"He wanted to walk where the Savior walked and stand where prophets have stood and feel what we all feel here," said Elder Holland. "The rich powerful influence of this land is palpable. I think he wanted that personally, as well as for the church."

President Nelson said he had symbolic reasons for planning the global trip as he did.

"We wanted to start in Jerusalem to fortify ourselves with the message of the Lord Jesus Christ right from its very inception, here where he was born, where he lived, where he ministered and where he was crucified," President Nelson said.

Elder Holland also said, "You don’t have to come to a scene, a setting, to appreciate the Savior, or the prophets or the events, you could do that in the privacy of a missionary apartment in South America or Asia or you could do it in a primary class in Eastern Europe," said Elder Holland. "But to add to that the privilege of being in the land that [the Savior] loved and on the soil that he walked, it really is a magnificent personal experience and I will never grow tired of that."

Likewise, we don't have to visit Cumorah to appreciate the events that took place there. But we can add to our appreciation of the events the privilege of being in the land that Mormon and Moroni and their people walked, making such a visit a magnificent personal experience of which we will never grow tired.
Posted by jonathan3d at 7:30 AM No comments: