Today in the Church, there is tremendous confusion over the very keystone of our religion.

On one hand, we have the consistent, explicit, and oft-repeated teachings of the prophets and apostles that the hill Cumorah (Mormon 6:6) is in New York.

On the other hand, we have the consistent, explicit and oft-repeated teachings of the intellectuals that the hill Cumorah cannot be in New York, because of M2C (Mesoamerican/two-Cumorahs theory).

These teachings are being actively imposed on students at BYU/CES, while the teachings of the prophets is completely suppressed. 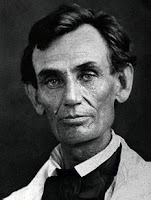 When he accepted his party's nomination for U.S. Senator in 1858, Abraham Lincoln gave his famous speech in which he said, "A house divided cannot stand."

Lincoln, of course, was referring to the slavery question. He went on to say, "I do not expect the Union to be dissolved — I do not expect the house to fall — but I do expect it will cease to be divided. It will become all one thing or all the other."

I think this is true also of the Church. I expect it will cease to be divided, one way or another. The question is, will we as members side with the prophets, or with the intellectuals?

The perennial problem was well described by Hugh Nibley:

Once the true prophet has been duly rejected and passed to his reward, swarms of experts descend upon his words to begin the learned business of exegesis. The words of the dead prophets become the peculiar possession of armies of specially trained and carefully conditioned scholars.

In a very old text, Peter is reported as saying in a letter to James regarding the use of his own writings in the church: “They think they are able to interpret my own words better than I can, telling their hearers that they are conveying my very thoughts to them, while the fact is that such things never entered my mind. If they take such outrageous liberties while I am alive, what will they do after I am gone!”

It is amazing to watch this process unfold in today's LDS Church. We have intellectuals at BYU/CES who, to confirm their M2C bias, have "duly rejected" the teachings of LDS prophets and are now telling students that they weren't speaking as prophets anyway.

They were merely "expressing their opinions," and, of course, they were "wrong" because today's intellectuals know better.

I'm continually surprised that so many LDS people side with the intellectuals. In many cases, it's innocent; many Church members don't even know what the prophets have taught about Cumorah. The intellectuals in the Church have been diligent and persistent in suppressing the truth.

They've also approached this with great expertise. They've reframed the issue as not a question about believing and following the prophets, but instead judging the prophets and deciding that they never actually taught that Cumorah was in New York, or if they did, it was merely their incorrect opinion.


Will the intellectuals prevail?

That depends on how many members of the Church choose to follow them instead of the prophets.

Posted by jonathan3d at 9:45 AM No comments:

One of the reasons we are having trouble reaching consensus is that the M2C intellectuals simply refuse to tell their readers all the facts.

Not that facts change anyone's mind, of course; I've been explaining confirmation bias on my other blogs. Because the M2C proponents have chosen to follow the intellectuals instead of the prophets, there is literally nothing any Church leader can say that will change their minds, and nothing that any intellectual can say that will change the minds of those who follow the prophets.

However, if we believe the Book of Mormon, we cannot reach unity unless we heed the words of the prophets and apostles.

I've yet to have an M2C proponent explain to me how we can reach consensus by following the intellectuals. Actually, at this point, I don't think they even want consensus.

But we should at least agree to all the same facts.
_____

FairMormon is one of the worst examples of imposing their editorial views on their readers. They simply hide information they don't like. I've shown lots of examples before, but because they continue to refuse to follow the Church's policy of neutrality, I'll show another one today.

FairMormon has it here:

This is the first paragraph of FairMormon's edited excerpt:

There is a tendency, strongly manifested . . . among some of the brethren, to study the geography of the Book of Mormon. . . . We are greatly pleased to notice the . . . interest taken by the Saints in this holy book. . . . But valuable as is the Book of Mormon both in doctrine and history, yet it is possible to put this sacred volume to uses for which it was never intended, uses which are detrimental rather than advantageous to the cause of truth, and consequently to the work of the Lord. . . .

When you read it in context, he says nothing about questioning the New York location of Cumorah. But he does make an interesting comment about geography generally.

The First Presidency has often been asked to prepare some suggestive map illustrative of Nephite geography, but have never consented to do so. Nor are we acquainted with any of the Twelve Apostles who would undertake such a task. The reason is, that without further information they are not prepared even to suggest [a map]. The word of the Lord or the translation of other ancient records is required to clear up many points now so obscure....

For these reasons we have strong objections to the introduction of maps and their circulation among our people which profess to give the location of the Nephite cities and settlements.

Does this refusal to prepare or approve of a map mean President Cannon did not accept the New York Cumorah, as some have suggested?
_____

Cannon published his editorial in the Juvenile Instructor in 1890.

IOW, 9 years after Cannon's editorial that said the First Presidency opposed maps of Book of Mormon geography, another member of the same First Presidency--a future President--published Letter VII, which declares that the Hill Cumorah is in New York.

This sequence makes the point that other Church leaders have made (including James E. Talmage and Orson Pratt); i.e. that the teaching about the New York Cumorah is consistent with the First Presidency's refusal to speculate beyond Cumorah.

Of course, FairMormon will never tell its readers about this.
_____

It's also interesting to read about Joseph F. Smith and George Albert Smith collecting arrowheads at Cumorah as evidence:

Back to President Cannon. He referred to Cumorah once in his journal. He was going to meet someone in New York City and he wrote:

I reached New York a little after 4 oclock, but found Bro. Hart absent. The hotel people did not know where he had gone, but I learned from two of the brethren whom I met that he had gone to visit Cumorah.

Obviously, this isn't a declaration about Mormon 6:6, but it does show that Cannon considered the hill in New York to be Cumorah.

This journal only goes up to 1883, but they're planning to publish the rest eventually. He died in 1901. Perhaps subsequent entries in his journal will give more insight into the 1890 editorial.
_____