The only way out is through progress

“The only way out is through progress.” @naval

Progress in this case would come with full and complete disclosure of all the historical facts related to Book of Mormon historicity.

While it's true that facts don't matter, in the sense that people interpret the facts to align with their biases (confirmation bias), unity and agreement has no chance when people are not even dealing with the same facts. Fact silos are great for confirming biases, but they erect barriers to greater understanding, unity and harmony.

There is always room for various interpretations of the facts. The concept of multiple working hypotheses eliminates confusion and contention by clarifying that differences of opinion are not based on different, or incomplete, facts.

Until everyone agrees at least on the objective facts, including the full historical record, there is no viable path out of the confusion that currently exists.

This is why the Saints book, which omits key elements of Church history to accommodate M2C and SITH, is problematic. By keeping readers ignorant, the Saints book leaves members confused when they learn what the prophets have actually taught.

At a minimum, everyone should be familiar with the facts included in this list.

Steven Harper, the current editor of BYU Studies, has observed that "Some people are under the impression that it’s the facts of the matter that turn the tide. No, it isn’t.... Everybody invested in this knows the facts.... It’s not that one of us knows the evidence better than the other. It’s that we just make different choices about what the evidence means."

Ironically, Harper was one of the main contributors to the Saints book. He knows better than most how Saints creates a false historical narrative present regarding the beliefs of Joseph's contemporaries regarding both the New York Cumorah and the translation with the Urim and Thummim.

I continue to hope that the Saints book will be revised to accurately reflect Church history on these topics so the Latter-day Saints can make informed decisions.

Some people quote the Gospel Topics Essays and entries as if they were scripture. These anonymous essays offer information for consideration and discussion. Unlike the scriptures and the official teachings of the prophets, these essays have been revised in the past and are still subject to revision at any time without notice.

The Gospel Topics Essay on Book of Mormon translation doesn't even quote what Joseph and Oliver said about the Urim and Thummim.

The Gospel Topics entry on Book of Mormon Geography doesn't even refer to, let alone quote, what the prophets have taught about Cumorah.

In his book “Extraordinary Popular Delusions and the Madness of Crowds,” Charles Mackay wrote: "of all the offspring of Time, Error is the most ancient, and is so old and familiar an acquaintance, that Truth, when discovered, comes upon most of us like an intruder, and meets the intruder's welcome."

There is plenty of room for optimism, however. Eventually the right thing will happen. Despite the omissions in the Saints book, people have access to the teachings of the prophets in the Joseph Smith Papers, the General Conference reports, and in various books, articles, etc.

Pessimism is an easy trap to fall into, but it implies that humans are not creative. Pessimism doesn’t acknowledge all the ways that we have innovated our way out of previous traps.

If you’re a pessimist, you get your feedback from other people. It’s a social act. You’re convincing other people of your pessimism. But entrepreneurs get feedback from nature and free markets, which I believe are much more realistic feedback mechanisms.

So far, most of the pessimistic predictions have turned out to be false. If you look at the timelines on which the world was supposed to end or environmental catastrophes were supposed to happen, they’ve been quite wrong.

The possession of mankind

A year ago, Elder Christofferson taught that "The Book of Mormon is the possession of mankind."

The Title Page explains that the abridgments of the record of the people of Nephi and the people of Jared was provided "to the convincing of the Jew and Gentile that Jesus is the Christ, the Eternal God, manifesting himself unto all nations."

With these principles in mind, we can think of the Book of Mormon as a way to bring all people to Christ, regardless of their current beliefs and affiliations. People of all faiths--and no faith--can appreciate the Book of Mormon for the truths it teaches.

To the extent we use the Book of Mormon primarily as a missionary tool, we may be building more barriers than bridges.

Accepting the Book of Mormon for its merits would dissolve much of the disputes, contention and misunderstanding among various groups and individuals.

Recently, I did an interview with an evangelical who is interested in the Restoration movement. You can see it here: 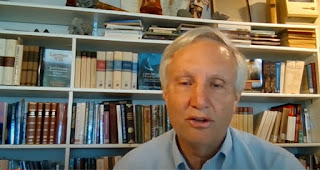