One of the biggest obstacles to reaching consensus is interpreting the text through Mesoamerican lenses. Along with volcanoes, headwaters, and tapirs, the claim that Mayan cities are described in the text is inexplicable.

There are only three verses in the text that mention cement, all in Helaman:

Helaman 3:7-11
7 And there being but little timber upon the face of the land, nevertheless the people who went forth became exceedingly expert in the working of cement; therefore they did build houses of cement, in the which they did dwell.

9 And the people who were in the land northward did dwell in tents, and in houses of cement, and they did suffer whatsoever tree should spring up upon the face of the land that it should grow up, that in time they might have timber to build their houses, yea, their cities, and their temples, and their synagogues, and their sanctuaries, and all manner of their buildings.

10 And it came to pass as timber was exceedingly scarce in the land northward, they did send forth much by the way of shipping.

11 And thus they did enable the people in the land northward that they might build many cities, both of wood and of cement.

There is not a single mention anywhere in the Book of Mormon of people constructing buildings with stones or rocks.

Even in these verses in Helaman, they built houses of cement. They needed timber, not stones, to build their "houses, yea, their cities, and their temples, and their synagogues, and their sanctuaries, and all manner of their buildings." Even if large stones were available, they explicitly did not use them. Instead, they imported lumber before they built their cities.

So if we read the text, we should be looking for a culture that built with wood (timber), along with cement, but not with stone.

The last thing we would look for is something such as this: 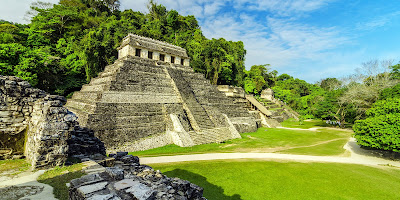 Oddly, this photo illustrates KnoWhy #174 at Book of Mormon Central. The title is "When Did Cement Become Common in Ancient America?" The photo shows anything but a culture that built with wood and cement.

The article proceeds to discuss archaeological finds involving cement in Teotihuacan in central Mexico, "which some Book of Mormon scholars consider to be in the land northward." Anyone who has visited Teotihuacan, as I have, knows these massive buildings were not made out of wood and cement, as the Book of Mormon says. They were constructed with stone and cement.

There is another mention of cement in connection with the Book of Mormon. Joseph Smith described the box that contained the plates, which was originally constructed by Moroni:

"Having removed the earth, I obtained a lever, which I got fixed under the edge of the stone, and with a little exertion raised it up. I looked in, and there indeed did I behold the plates, the Urim and Thummim, and the breastplate, as stated by the messenger. The box in which they lay was formed by laying stones together in some kind of cement. In the bottom of the box were laid two stones crossways of the box, and on these stones lay the plates and the other things with them."

Moroni knew how to fabricate and use cement when he was in New York (unless you want to believe he hauled cement 3,400 miles north from Mesoamerica along with the plates and other artifacts).

At Cahokia, across from St. Louis, archaeologists have reconstructed the wood and cement walls that were common anciently in that area. These particular walls date a few hundred years after Book of Mormon times, but they show the kind of construction the text describes: wood and cement. 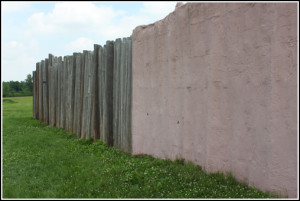 The ancient people used the cement in these structures to fortify and protect the wood. This type of cement doesn't last a long time. It didn't survive even a thousand years, so it couldn't have survived from even earlier Book of Mormon times. For that matter, could we reasonably expect any of the Nephite wooden structures to survive to this day?

As always, I think it's more useful to read the text and then look for something in archaeology that matches instead of deciding on a setting and then changing the text to make it match.

Any culture that built with stone instead of with wood (and, for a short time in one location, cement) cannot be the culture described in the Book of Mormon.