If you've been following these blogs, you undoubtedly know that most LDS people still have a vague notion that the Book of Mormon took place in Central America. They probably have never read BYU Studies, or books and articles published by Deseret Book, the Maxwell Institute, or the various organizations and web pages that promote the Mesoamerican theory.

So where does the notion come from?

It's definitely not in the text.

But it is in LDS culture.

Mesoamerican imagery is ubiquitous in Church media, creating expectations and imprinting interpretations that last a lifetime.

Think about the impact the media has. Do kids growing up with these images have any chance of imagining the Book of Mormon in North America?

Historical narratives are created by words and images, but images usually prevail over words. Images are easier to remember, especially when they are viewed many times.

The Mesoamerican narrative is so strongly imprinted that even considering a different setting feels somehow disloyal to what one has been taught from childhood.

Church authorities did not commission Arnold Friberg to illustrate the Book of Mormon. The work was privately funded and then donated to the Church. Apparently Church leaders at the time were reluctant to illustrate the text.

They probably knew that once a scene was depicted, it would become fixed in the minds of the people. And that is exactly what has happened.

I think the LDS scholars who continue to promote the Mesoamerican geography were deeply influenced at a young age and don't even realize it. 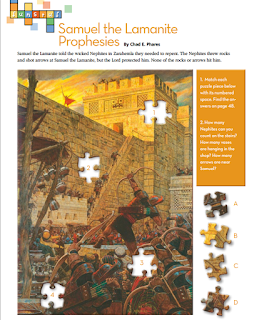 Here's an example of how children are taught to think of Samuel the Lamanite, the city of Zarahemla, and what Nephites looked like. In this puzzle from the Friend, children are asked to study this painting in detail, using a form of catechism.

"How many Nephites can you count on the stairs?"
"How many vases are hanging in the shop?"
"How many arrows are near Samuel?"

Every Primary child is taught from an early age that the city of Zarahemla was built of massive stone structures featuring Mayan motifs. The text says nothing of the sort. There is not a single building made from stone in the entire Book of Mormon. And yet, this illustration launches children on a course of expectations that stays with them their entire lives.
___________________________ 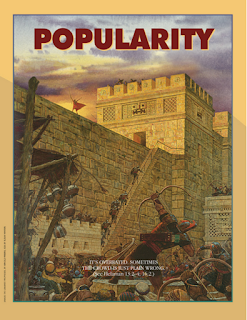 The lessons from Primary are reinforced over the years. Here's a poster from the New Era that reiterates the message about the city of Zarahemla and the appearance of the Nephites.

This one is particularly ironic because the caption, with the title, reads:

Popularity. It's overrated. Sometimes the crowed is just plain wrong. 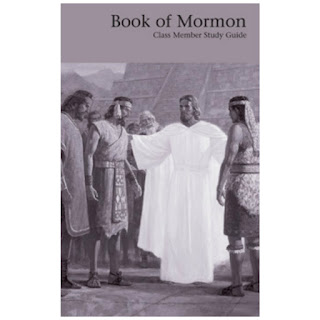 The Sunday School manual and student guide is explicitly Mayan.

Fortunately, the lessons don't focus on geography, but the when the only illustration in the manual depicts a Mayan scene, the message is clear and unmistakable. 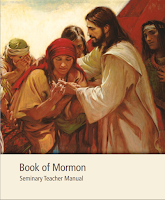 Here is the cover for the Book of Mormon Seminary Teacher Manual. It's almost generic, but the massive stone pyramid in the background pays homage to the Friberg painting of the massive stone Mayan pyramid that is also featured in the logos of the scholarly organizations. 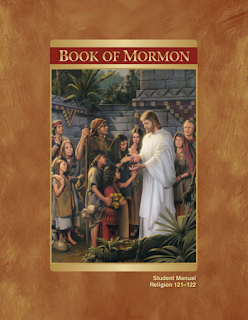 The Institute manual is also explicitly Mayan with the temple structure and the jungle vegetation. No ambiguity here.

When Church-approved material depicts a consistent Mayan setting for the Book of Mormon from Primary through adulthood classes, what other conclusion can members reach? 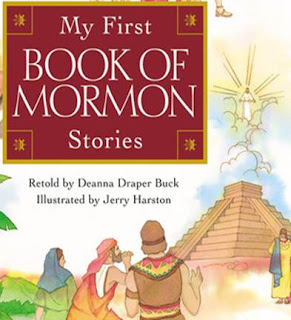 Because official publications feature Mayan themes, it is not surprising that private individuals pick up on that theme and expand it. Here are a couple of examples.

My First Book of Mormon Stories goes hand-in-hand with the Primary materials to imprint a Mayan setting in the minds of the children. Presumably the authors and publisher feel safe to depict the Book of Mormon this way because they're basically replicating the ubiquitous Arnold Friberg painting. 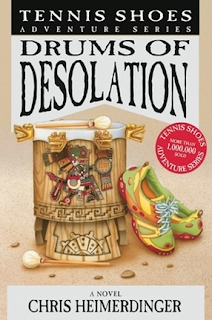 The Tennis Shoes series has sold over a million copies and has influenced untold numbers of people.

Of course, people can believe whatever they want. Artists can interpret the text however they want. But parents and teachers and Church leaders and missionaries and individuals need to be aware of the power of media in forming narratives.

It is far better to stick to the text than to rely on these images. In the text, there is not a single pyramid, stone building, or jungle animal or plant.

So why do artists continue to depict Mayan features in Book of Mormon art?