working cover of The Rational Restoration

Here's the working cover of the book. 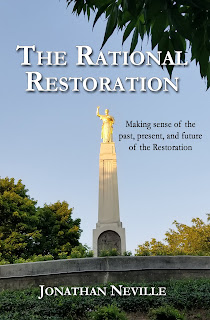 Posted by jonathan3d at 8:37 AM No comments:

How to Zion - more examples

I've been posting on my "how to Zion" blog, here:

There is so much good happening throughout the world. We live in exciting times!

I'm also excited about my upcoming book, The Rational Restoration, which will be released in October. I'll post some announcements here next week.

Hank Smith
@hankrsmith
·
20h
I love being around people who point out the best in others. People who value those around them. They compliment, uplift, & are genuinely interested in everyone. See beyond weaknesses and past mistakes. Point out the good & leave others feeling better about themselves.
Posted by jonathan3d at 7:30 AM No comments:

Me in the Liahona

There is a lot of room for reaching consensus with fellow Christians who are not Latter-day Saints.

After all, the purpose of the Book of Mormon, set out in the Title Page, says nothing about joining any church. Naturally, people join the Church of Jesus Christ of Latter-day Saints to make covenants, but to the extent the book brings people closer to Christ, it blesses lives.

Which is to show unto the remnant of the house of Israel what great things the Lord hath done for their fathers; and that they may know the covenants of the Lord, that they are not cast off forever—And also to the convincing of the Jew and Gentile that Jesus is the Christ, the Eternal God, manifesting himself unto all nations

The French (European) edition of the October Liahona magazine published an article by my friend Gabriel Mourier about our visit with Baptist minister Lynn Ridenhour in 2019.

Here is the original French article.
https://www.churchofjesuschrist.org/study/liahona/2022/10/eur-fra-local-pages/local-news-003?lang=fra
The translated version:
https://www-churchofjesuschrist-org.translate.goog/study/liahona/2022/10/eur-fra-local-pages/local-news-003?lang=fra&_x_tr_sl=fr&_x_tr_tl=en&_x_tr_hl=en&_x_tr_pto=wapp
The print version has photos (see below). 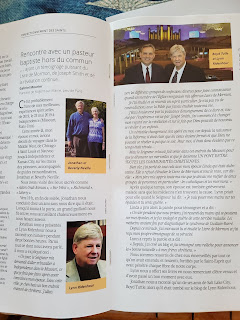 Making the world a better place

Like you, good readers, I wake up every morning eager to make the world a better place.

There's so much good to be done.

If you're working at a full-time job, you're making the world a better place.

If you're serving in your family, neighborhood, community, or in your ward (or other church), you're making the world a better place.

If you're helping someone in need, financially, emotionally, spiritually, or physically, you're making the world a better place.

From time to time, I post about these ideas on my blog https://howtozion.blogspot.com/.

Because I'm retired from full-time job commitments, here are some of the things I enjoy doing to make the world a better place. What do you like to do?

- Working with my wife to train Pathway missionaries in South America.

- Corresponding with people around the world.

- Helping someone in need financially, emotionally, spiritually, and/or physically.

- Golfing, fishing, tennis, basketball, kayaking, swimming, and various other sports/activities with other people.

- Having people over for dinner.

- Family activities. For example, last week we had a quick trip to Utah and took our grandkids to Snowbird on the tram, etc.

The Scout motto - do a good turn daily - even has an app: https://goodturn.app/.

all rational points of view

One cause of confusion, mistrust and contention is the suppression by the majority of opinions, points of view, and perspectives of the minority.

President Dallin H. Oaks spoke at the inauguration of the BYU law school when he was president of the university:

The curriculum and manner of instruction in the J Reuben Clark Law School should approach the law from a scholarly and objective point of view, with the largest latitude in the matters being considered.....

It is uniquely important that its students be exposed to all rational points of view on every question worthy of study. Failure to provide this kind of training would put our graduates at a significant disadvantage when they meet the opposing arguments--as they will.

We can assess the legitimacy and productivity of any educational organization by how well it observes President Oaks' admonition.

Critics are awesome. They complain no matter what happens. 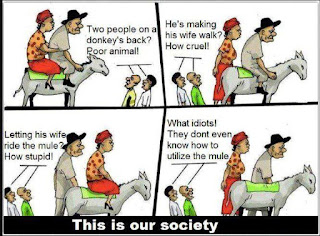 Then there's the fun of distraction... 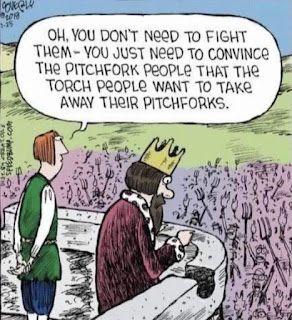 Someone sent me this link and I found it well worth sharing because of the way the speaker explains how to handle disagreements charitably.

People can reach consensus on this approach even when (especially when) they disagree on the underlying issues. 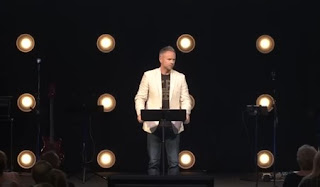 It's a presentation by Sean McDowell, a Christian minister who focuses on youth ministry.

A rhetorical question as we begin how well do you think we as Christians handle disagreements on important but secondary issues to salvation. In other words on issues that matter but are not tied to whether we're saved or not

Do we disagree charitably or uncharitably, agreeably or disagreeably?

My point is not what position you should hold on these. My question is amidst differences within the body of Christ, how do we treat one another amidst these differences?

By the way I'm not going to have you turn and share your perspective on these, don't worry. Vaccines, immigration, critical race theory, gun control, voting for Trump voting for Biden...

The reality is we won't but there are some of you in this room that have a different perspective on every single one of those issues how do we treat each other amidst disagreement.

I'm not saying that all perspectives on these issues are equal that's not my point. I'm simply saying amidst differences on important issues that are not essentially salvific how do we treat one another?

What about theological issues some of the most divisive issues tend to be the role of women in the church in the family, the age of the earth and what we're in the middle of studying right now, the end times?

Now why is this question important because you know what Jesus says in john 13 35, he says by this all people will know that you are my disciples if you have what for one another love for one another in other words Jesus says people are going to look at the world and look at your life and look at my life and know whom we follow and who we call king by whether or not we love one another as brothers and sisters in Christ.

It's pretty important we talk about disagreeing.

Well isn't it now, you know Satan's strategy of course.

Satan is a liar he's a murderer and he is a divider.

So I take you back about 10 or 12 years to the blockbuster movie at the time called the Avengers...

What's interesting about this film is the villain is Loki the half brother, the brother adopted brother of Thor.

Loki plays a Satan type figure he has rebelled against the gods goes to earth wants to be worshipped by everybody and even possesses people including Hawkeye but do you know what Loki's strategy in that film is?

Loki knows that he can't stand up to the Avengers and defeat them himself, but he knows if he can get the avengers to fight amongst himself he can win.

So his strategy is to turn hulk loose to fight against the rest of the Avengers.

I saw that I'm like I don't know if this is intentional or not but he's a Satan type figure who knows he cannot beat God and the church but if he can distract us by in fighting we have less energy and time to love those who need the gospel of Jesus Christ.

Posted by jonathan3d at 9:42 AM No comments: