A good place to begin discussing Book of Mormon geography is the "narrow neck of land."

Consequently, Brother Sorenson proposes this geography, based on an "hourglass" assumption: 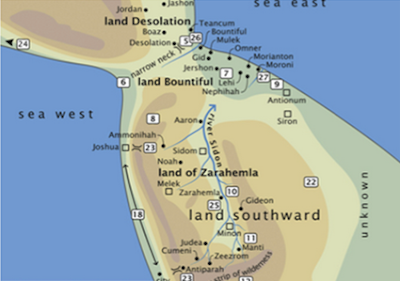 Notice that the "narrow neck" separates the two larger land masses. The basic hourglass shape is then placed into the real world by rotating it and dropping it onto Mesoamerica (southern Mexico and Guatemala), like this: 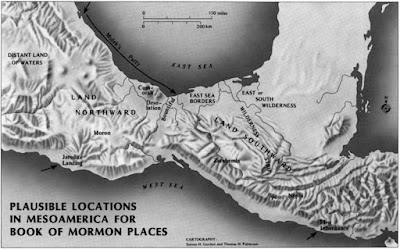 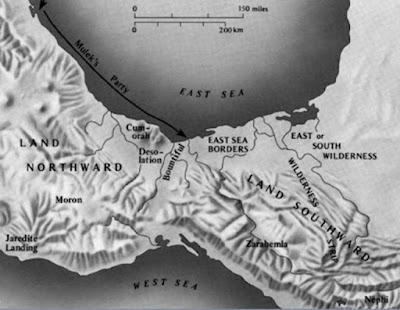 For now, disregard the problem that the "East Sea" is north, the "West Sea" is south, that there are no north or south seas, that the land "northward" is west and the land "southward" is east. Just look at the shape and scale of miles. 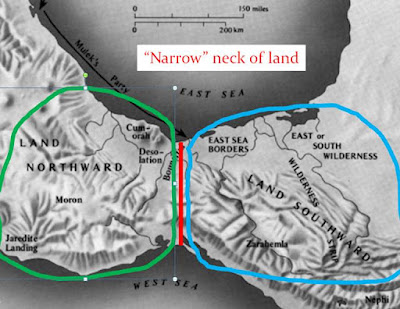 The red line is what you're supposed to believe is the "narrow neck." It is around 140 miles wide. (Many people have observed the incongruity of describing a 140-mile wide stretch of difficult terrain as "narrow." In my view, the incongruity speaks for itself; i.e., the Mesoamerican interpretation just doesn't fit the text. For now, though, I'm sticking with the Mesoamerican interpretation for sake of discussion and analysis.)

Now, what does the Book of Mormon say about the narrow neck?

Many people are surprised to learn that the term "narrow neck of land" is used only once in the entire Book of Mormon. Ether 10:20 says, "And they built a great city by the narrow neck of land, by the place where the sea divides the land."

Not a word about "connecting two sizable land masses" as Brother Sorenson insists.

Now, Mesoamerican proponents will cite Alma 63:5, which explains that Hagoth launched a large ship "into the west sea by the narrow neck which led into the land northward." But the text doesn't say this is a narrow neck of land. A water feature can also be a narrow neck.

I realize that should be obvious, but everything you read about the Mesoamerican setting conflates these terms.

Now, compare the two verses that refer to the "narrow neck" with Brother Sorenson's map. In Alma 63:5, the narrow neck led into the land northward. The Isthmus of Tehuantepec hardly leads anywhere. It is a slight narrowing that is imperceptible from the ground. You can't even see both oceans from any point along the Isthmus. Without a GPS or a very detailed map, you would cross the Isthmus without realizing you were going from one defined land into another. Nor does the sea divide the land in this area.

But there is a more fundamental problem. The Book of Mormon does define the border between the Lamanite lands southward and the Nephite lands northward. This is in Alma 22:27. The border is a "narrow strip of wilderness."

If, as Brother Sorenson and other Mesoamerican advocates claim, the term "narrow" means 140 miles or so, here is how wide the "narrow strip of wilderness" would be: 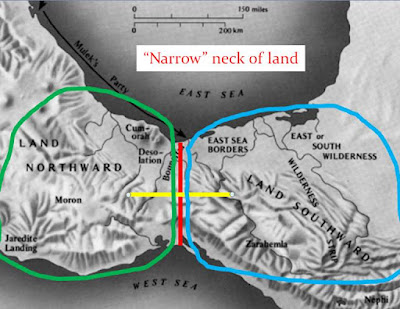 The yellow line is the exact same length as the red line. The text says this narrow strip of wilderness divided the land of Zarahemla from the land of the Lamanites. Here's how that would look. 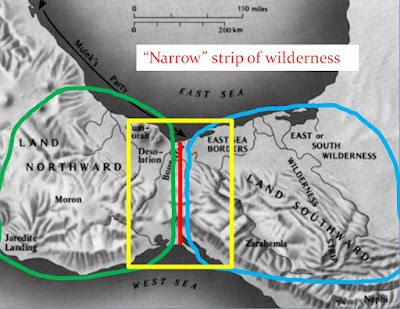 This "narrow strip of wilderness" would encompass all of Bountiful, Desolation, and even Cumorah. That can hardly qualify as a border. 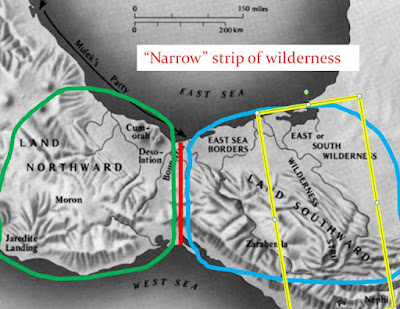 What I'm demonstrating here is one of the most fundamental misunderstandings of Book of Mormon geography. The text does not describe an hourglass shape.

To get an idea of what the term "narrow" means in the Book of Mormon, look at how it is used in other verses:

1 Nephi 8:20
20 And I also beheld a strait and narrow path, which came along by the rod of iron, even to the tree by which I stood

2 Nephi 9:41
41 O then, my beloved brethren, come unto the Lord, the Holy One. Remember that his paths are righteous. Behold, the way for man is narrow, but it lieth in a straight course before him,

2 Nephi 33:9
9 I also have charity for the Gentiles. But behold, for none of these can I hope except they shall be reconciled unto Christ, and enter into the narrow gate, and walk in the strait path which leads to life, and continue in the path until the end of the day of probation.

Jacob 6:11
11 O then, my beloved brethren, repent ye, and enter in at the strait gate, and continue in the way which is narrow, until ye shall obtain eternal life.

Helaman 3:29
29 Yea, we see that whosoever will may lay hold upon the word of God, which is quick and powerful, which shall divide asunder all the cunning and the snares and the wiles of the devil, and lead the man of Christ in a strait and narrow course across that everlasting gulf of misery which is prepared to engulf the wicked—

3 Nephi 14:14
14 Because strait is the gate, and narrow is the way, which leadeth unto life, and few there be that find it.

3 Nephi 27:33
33 And it came to pass that when Jesus had ended these sayings he said unto his disciples: Enter ye in at the strait gate; for strait is the gate, and narrow is the way that leads to life, and few there be that find it; but wide is the gate, and broad the way which leads to death, and many there be that travel therein, until the night cometh, wherein no man can work.

All of these examples have a connotation of a clearly defined path or way that one can easily follow, if one chooses. The last example contrasts the narrow way with a "wide gate" and a "broad way."

Some will say the language in these spiritual metaphors doesn't apply to the geography, but Alma specifically uses the same terminology--a narrow feature that leads somewhere--to apply to geography: "the narrow neck which led into the land northward."

Now, look again at the Mesoamerican map. Does the Isthmus of Tehuantepec make you think of a "narrow way" that few can find, or a "broad way" that many can travel in?

I already mentioned that other verses refer to a small neck, a narrow pass, and a narrow passage. The context of each of these fits perfectly with the concept of a narrow way and narrow gate as the term narrow is used throughout the Book of Mormon.

The entire text of the Book of Mormon is consistent when it uses the term "narrow."

It's the Mesoamerican interpretation that is inconsistent.

This is only one of many examples of how the Mesoamerican advocates twist the text to fit their preferred geography.
____________________

For those who have thought of the Book of Mormon geography in terms of an hourglass shape, here is the paradigm shift.

The border between the Nephites and Lamanites is a narrow strip of wilderness. As a metaphor, think of it as a fence. 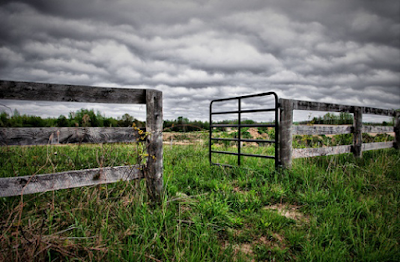 In upcoming posts I'll show how this fits the real world geography, but for now, I just want readers to re-evaluate the text and understand that the hourglass metaphor for Book of Mormon geography is based on erroneous assumptions, not on the text itself.

In fact, the hourglass metaphor contradicts the text.

Instead, the text (Alma 22:27) describes a long border, running east to west, with a few entry and exit points.

I repeat: the metaphor to think of is a long fence with gates.

(In the real world, it's not a fence the way we build them, but it is a definite, well-defined border. It is a narrow strip of wilderness, as I'll explain. Mormon picked the perfect phrase to describe this feature.)

This blog covers the multi-faceted process of reaching consensus about the historicity and setting of the Book of Mormon through education. For many people it involves changing long-held beliefs. It may mean adopting different paradigms and seeing things through new lenses.

For other people, the issues discussed here may be the first time they've thought about these things. The North American setting may seem obvious.

As it should.
Posted by jonathan3d at 7:04 AM No comments: