It is well known that both happiness and disappointment are directly related to expectations. When expectations are elevated above reality, people are disappointed. The concept is explained by this diagram:

Yet another way to describe the psychology of expectation is that we see the world through the lenses of our expectations. One writer has referred to "the curse of expectation."

Some have suggested an important principle this way: "the secret to happiness is low expectations," attributed to Barry Schwarz, who also suggests that having too many choices undermines happiness (a topic for another day).

This concept applies to many aspects of the Gospel (e.g., expectations about Church history, infallibility of leaders, fruits of living the Gospel, how others should behave, etc.). I'm only going to discuss how it applies to questions of Book of Mormon geography and historicity.
________________________

1. By depicting specific scenes in the text but without adhering to the actual text, they drive the interpretation of the text in the minds of nearly every LDS.

2. By depicting grandiose architecture, they raise false expectations about what Nephite society was actually like and where the events took place.

First, I emphasize I'm not being critical of Arnold Friberg. I've loved these paintings since I was a kid. He painted them for the Primary, and no doubt they have fueled the imagination of kids every since. But in so doing, the paintings raise expectations far beyond the reality. To some degree, the effect is subliminal; people passively accept the images and don't think much about them. But in some cases, the effect has been quite seriously negative. 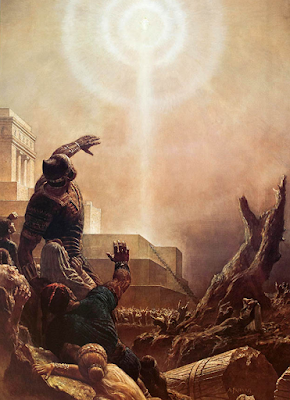 Let's look at this depiction of Christ visiting the Nephites.

There is much to love about this painting. As a kid, I studied every aspect of it. It was how I imagined 3 Nephi for most of my life (until recently).

When you see this painting over and over at Church, and embedded in the Book of Mormon itself, it is difficult to picture anything other than Christ appearing at this incredibly massive stone pyramid.

(People often comment on how incredibly strong the men always appear in the Friberg paintings. The physical strength was intended as a representation of their spiritual strength, a great concept to remember.)

But look at the details and remember that every LDS born since the early 1950s grew up with this painting as the primary depiction of the appearance of Christ to the Nephites.

Notice the steep stairs ascending at an angle.

Notice the stepped nature of the pyramid.

Now, look at the logos of some of the most prominent organizations that focus on Book of Mormon geography and historicity. 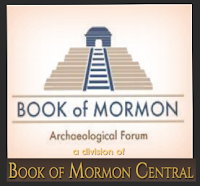 They each include the significant features from the Arnold Friberg painting.

And yet, the Book of Mormon never once mentions pyramids. It doesn't even mention people using stone to construct buildings!

I won't take the time to go through the other Friberg paintings, but you can do that on your own and see what I mean.

Whether the influence of the Friberg painting is subliminal or overt, you can decide. I don't think the people involved with these organizations realize how deeply they have been influenced by these paintings, but the evidence is there. Of course, it extends far beyond these logos. It is implicit in everything they write on the topic.

Ultimately, these faithful LDS scholars are trying to vindicate the expectations raised by the Friberg paintings from the time they were children. Many of them have made careers of studying ancient Mesoamerica. And I think it's driven by these paintings.

When they think about careers at an early age, kids have always been heavily influenced by media. Everyone wanted to be an astronaut when Neil Armstrong's hop onto the moon was broadcast on television. Forensics suddenly became a popular choice when shows such as Crime Scene Investigations and Law and Order became popular.  I have a grandson whose ambition is to become a "youtuber" when he grows up.

Let's set aside the scholars for a moment. Millions of Mormons have grown up with these Friberg-inspired expectations. It would be unnatural for them to "see" the Book of Mormon except through these lenses.

I've spoken with many LDS over the years. Most of them generally think of the Book of Mormon in a Central American setting, just as depicted by the Friberg paintings. They don't think much beyond that; to most people, ancient America is a general concept, not a specific point in time and space. Ancient is ancient, wherever it was.

For Mormons, it's natural to defer to the scholars who are reaffirming the images imprinted on our minds from a young age.

But some people inquire further.

Some people start to wonder how valid the Friberg-inspired expectations really are.

And when they do, they soon discover things such as the two-Cumorah theory and the anachronisms of the Chichen Itza pyramid set in Book of Mormon times. Many people are shocked to realize the LDS scholars insist the "real" Cumorah is somewhere in Central America.

As Joseph Fielding Smith warned, the two-Cumorah causes members to become confused and disturbed in their faith in the Book of Mormon.

Sadly, tragically, their disappointment is not because the Book of Mormon is not true, but because of the discrepancy between the false expectations they were raised with and the reality of what the text actually says.
______________________

I have more blog posts coming on expectations from the text. Stay tuned.