Thought experiment #2: What if Joseph Smith actually translated the plates?

It's amazing that we've reached the point where proposing that Joseph Smith translated the plates is merely a thought experiment, but that's where we are.

It's amazing because what Joseph and Oliver claimed is the simplest, clearest explanation. It is also corroborated by the facts.

Nevertheless, our LDS historians have agreed with long-time critics that Joseph Smith didn't really translate the Book of Mormon in any normal sense of the term. Instead, they claim he merely read words that appeared on the stone-in-the-hat (SITH). [I'll address the SITH-sayers below.]

One well-known LDS scholar, Royal Skousen, has set forth the obvious and inevitable end-game of the SITH theory:

“Joseph Smith’s claim that he used the Urim and Thummim is only partially true [i.e., regarding the 116 pages]; and Oliver Cowdery’s statements that Joseph used the original instrument while he, Oliver, was the scribe appear to be intentionally misleading.” (emphasis added)

Our "top" LDS scholars also claim Oliver intentionally misled everyone about the New York Cumorah, and that Joseph went along with that false narrative. Given that approach, it's a small step for them to also reach Brother Skousen's conclusion about the translation.

By far, the simplest explanation for the Book of Mormon is the one Joseph gave; i.e., he copied characters off the plates, translated them by means of the Urim and Thummim, and then proceeded to translate the engravings on the plates.

He explained it this way in the Elders' Journal in 1838.

Question 4th. How, and where did you obtain the book of Mormon?

Answer. Moroni, the person who deposited the plates, from whence the book of Mormon was translated, in a hill in Manchester, Ontario County New York, being dead, and raised again therefrom, appeared unto me, and told me where they were; and gave me directions how to obtain them. I obtained them, and the Urim and Thummim with them; by the means of which, I translated the plates; and thus came the book of Mormon.

By contrast, SITH requires a series of complex assumptions, starting with speculation about the identity of the actual translator.

Joseph as translator answers the claims of the critics.

SITH not only doesn't answer the claims of the critics, but it raises more questions.

For those who accept SITH, consider this thought experiment:

What if Joseph Smith actually translated the plates?

The thought experiment requires context. Currently, the prevailing theory about the translation among both LDS intellectuals and critics of the Church is that Joseph produced the Book of Mormon by reading words that appeared on the stone in the hat (SITH).

Yet SITH is one of the principal reasons why people lose faith in the Book of Mormon for several reasons.

3. If all the words came from the stone, someone had to put them there. This means that, assuming the words were related somehow to the plates, the mysterious incognito supernatural translator (MIST) knew both the Nephite language and the English language. This raises at least three questions.

3.a.  Why did the MIST make errors that Joseph read to his scribes, including variant spellings?

3.b.  Why did the MIST make both substantive and grammatical errors that Joseph later corrected for future editions as he learned better grammar?

3.c. Why did the MIST borrow phrasing and concepts from The Late War, View of the Hebrews, and such Christian writers as Jonathan Edwards and James Hervey which were readily available in Palmyra?

4. If the text of the Book of Mormon came from SITH instead of an actual translation of the plates, there is no connection between antiquity and the text. Because there is also no way to know the identity of the MIST, unbelievers can attribute the text to sources other than the divine.

What if, instead of SITH, Joseph Smith actually translated the plates?

Lately, LDS scholars won't even entertain the possibility. But the rest of us can, and should.

If Joseph and Oliver told the truth (i.e., that Joseph actually translated the engravings on the plates), they directly refuted each of the objections listed above. For discussion sake, we will refer to Joseph as translator with the acronym JT.

1. JT refutes the claim that Church leaders were misleading people when they taught that Joseph translated the plates. E.g., JT refutes the arguments in https://read.cesletter.org/bom-translation/

2. JT teaches that Joseph used the plates; he couldn't have produced the text without the plates. Thus, the entire narrative of ancient people carefully writing and protecting the plates not only makes sense, but it was essential. This makes the testimony of the witnesses of the plates not only relevant, but determinative and conclusive.

3. JT requires Joseph to know both the Nephite language and the English language. He explained that before he dictated any translation, he learned the meaning of the characters, and he obviously knew English. This solves the following three SITH-related questions.

3.a.  Joseph dictated his translation to his scribes, who wrote variant spellings. Although some claimed Joseph corrected spelling, we can see in the original manuscript that, if he did correct some spelling, he didn't correct a lot of it. But he wasn't reading an English text in the first place.

3.b.  As any translator would, Joseph made both substantive and grammatical errors that he later corrected for future editions. Translators always have the prerogative to modify their translations.

3.c. Translators necessarily draw upon their own syntax or mental language bank. Joseph could not do otherwise; hence, we would expect phrasing and concepts from The Late War, View of the Hebrews, and such Christian writers as Jonathan Edwards and James Hervey which were readily available in Palmyra. The presence of these influences in the text corroborates Joseph's claim that he translated the engravings "after the manner of his language."

Let's review why this issue is important for some people but not for others.

1. I've been told that it doesn't matter where the text of the Book of Mormon originated because it's true either way. I respect that view. If that's your view, great. Read no further.

That's the same view that people in all religions take regarding their sacred books.

To the extent truth is subjective, fine. Everyone thinks their own beliefs are correct or they'd change them. That's axiomatic. While the persuasive power of spiritual confirmation is undeniable, it is also transitory. People convert into and out of various religions, and people of all ages in all religions range from apathetic to dogmatic.

But the Book of Mormon was written to the convincing of people. That means something more than a subjective preference based on where people grew up and in what culture.

3. The Book of Mormon has always been different from any other book because, as a translation of a previously unknown ancient record, it could have materialized only through divine intervention. That origin is convincing for those who accept the narrative because it is factual, rational, and supported by extrinsic evidence.

But SITH teaches that it wasn't really a translation and the ancient record narrative was superfluous. SITH accommodates (but does not require) the claim that the text originated with the divine somehow, but not the way Joseph and Oliver said it did.

SITH not only undermines the credibility and reliability of Joseph and Oliver, but it directly attacks the divine authenticity of the Book of Mormon, as well as its historicity.

That's why this issue is important.

The SITH-sayers. The contrast between SITH and JT is so stark and obvious, we wonder how any believing scholars could be persuaded to embrace SITH. After all, this debate has been ongoing since the 1834 book Mormonism Unvailed, which ridiculed SITH and pointed out both its absurdity and the futility of the witnesses if Joseph didn't even use the plates. Oliver and Joseph responded to that book by reaffirming that Joseph translated the plates and demonstrating that the text relates actual history that took place in the real world, using the New York Cumorah as a pin in the map.

Nevertheless, several witnesses claimed they observed Joseph put a stone in a hat, cover his face with the hat, and dictate words. These include primarily Emma Smith, David Whitmer, and Martin Harris. 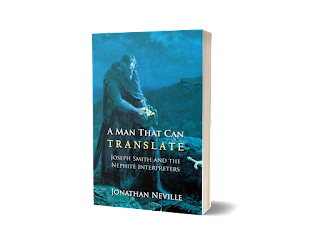 Time and space constraints preclude assessing all the statements, but for those interested I've done that in the book A Man that Can Translate.

Basically, I concluded that these witnesses sought to refute the Spalding theory, which required them to testify that Joseph had no manuscript to read from. That becomes obvious when their statements are read in context instead of the brief excerpts that everyone quotes.

Instead of the actual translation, they each observed a demonstration Joseph conducted with SITH in the Whitmer home. As Gurley explained, Joseph used the stone to satisfy the curiosity of his followers but did not use it to actually produce the Book of Mormon. Joseph had been commanded not to show the U&T or plates to anyone, so he couldn't conduct the translation in the open.

A key to understanding the SITH-sayers is differentiating between what the witnesses actually observed vs. what they inferred or assumed. This is a basic principle in assessing witness testimony that lawyers are familiar with but many other people are not. Because translation is a mental process, no one can witness someone translating; a witness can observe someone dictating words, but a witness cannot know the source of the words. For that, we have to rely on the person dictating. In this case, Joseph always said he translated the plates with the U&T. Whatever he did with SITH, it was not translating.

As for how Joseph used the U&T, I'll discuss that in an upcoming post.