Thought Experiment #1: what if LDS scholars believed the prophets

Thought experiments are useful for lots of reasons, but in some cases, an imagined scenario can assume a life of its own. We could think of a thought experiment as representing a parallel universe where different decisions lead to different outcomes (realities).

I'm going to pose a series of thought experiments in the nature of alternative history. 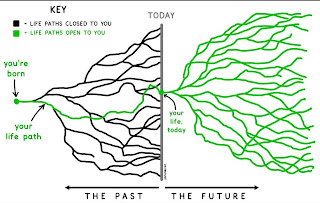 This graphic of life paths is similar to the possible paths of Church history. At every decision point, a different choice would have led to a different outcome.

Thought experiments are speculative, but they can also inform and guide future decisions.

Another way to think of this is in terms of course corrections. An error in the past can be somewhat corrected by changing course now.

Thought Experiment #1 is, what if LDS scholars believed the teachings of the prophets?

There are a lot of places we could start. Maybe we'll consider some of these in future thought experiments. Think how different the present would be if any of the following had happened. Maybe in a parallel universe these things have happened and we, in this universe, just don't know about it.

- 1823: What if we found a contemporaneous letter or journal entry that confirmed Lucy Mack Smith's report that when he first appeared to Joseph Smith, Moroni told Joseph the plates were deposited in the "hill of Cumorah," making this the first time Joseph ever heard the term? No doubt our M2C scholars would rationalize it away somehow, but how would such a document have changed history?

- 1827: What if others in addition to Lucy reported that Joseph was referring to the hill as Cumorah months before he got the plates?

- 1829: What if Oliver and Joseph had also left records to corroborate David Whitmer's account of meeting the messenger who was taking the abridged plates from Harmony to Cumorah?

- 1835: What if the original First Presidency had declared that it was a fact that the Cumorah of Mormon 6:6 is the hill in New York where the plates were deposited? Well, that isn't a hypothetical, because the Assistant President of the Church did declare that and all the other members concurred. But what if LDS scholars today accepted that?

- 1842: What if Orson Pratt had accepted Joseph's gentle but firm rebuke in the Wentworth letter of Pratt's hemispheric theory?

- 1899: What if President Joseph F. Smith, as editor of the Improvement Era, republished Letter VII to counter anti-Mormon claims that Cumorah could not be in New York? Well, that's not a hypothetical; that actually happened. What if LDS scholars accepted Letter VII in 1899?

- 1921: What if, when he eliminated Orson Pratt's speculative footnotes from the official edition of the Book of Mormon, James E. Talmage had retained the factual footnotes, including the location of Cumorah in Manchester, New York?

- 1935: What if LDS scholars had heeded Joseph Fielding Smith's warning that rejecting the New York Cumorah in favor of M2C would cause members to become confused and disturbed in their faith in the Book of Mormon?

Those would each be interesting, but let's start with 1990 and the Cumorah letter from the Office of the First Presidency because this was recently in the news on social media.

Background: In 1990, the Office of the First Presidency responded to an inquiry from a Church member “about the location of the Hill Cumorah mentioned in the Book of Mormon, where the last battle between the Nephites and Lamanites took place.” The letter explained: “The Church has long maintained, as attested to by references in the writings of General Authorities, that the Hill Cumorah in western New York state is the same as referenced in the Book of Mormon.”

It's a simple, factual statement supported by plenty of historical documentation that shouldn't have been controversial at all. But because the facts contradict the M2C theory promoted by LDS apologists at FARMS (now the Interpreter, FAIRLDS, and Book of Mormon Central), the apologists tried to undermine and discredit the letter.

A recent podcast by Mormonism Live with RFM titled "Mormon Apologist Skullduggery - The Mystery of the Second Watson Letter" discussed the issue at length.

Thought Experiment #1 is, what if LDS scholars believed the teachings of the prophets as summarized in the 1990 letter? 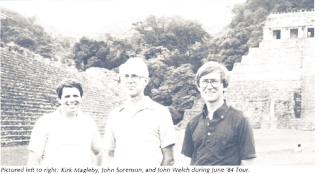 John Sorenson, who had published his Ancient American Setting for the Book of Mormon in 1984, might have said to himself, "Well, maybe I'm wrong about the Mayan thing, after all."

His followers, starting with Jack Welch and Kirk Magleby, might have said, "You know, there are a lot of logical and factual fallacies in that book. We were fine with them because they served a purpose, but if the prophets were right about Cumorah, maybe we should reconsider."

Dan Peterson and William Hamblin might have said, "The New York Cumorah is the only logical setting, just as we've said all along. Our critics are idiots."

FARMS (and eventually Book of Mormon Central) would have changed their logo to reflect the actual language of the Book of Mormon, replacing the Mayan glyph with the letter A to represent English.

Instead of spending decades seeking for evidence in Mesoamerican to prove the prophets were wrong, LDS scholars would have sought evidence to support the teachings of the prophets.

And they would have found it, in abundance, right in North America.

LDS scholars would have interpreted the text to corroborate, not repudiate, the New York Cumorah. They would have recognized that the text does not say or imply there were millions of Jaredites killed at Cumorah, or hundreds of thousands of Nephites/Lamanites.

They would have noticed that the text does not refer to volcanoes or an isthmus, but instead describes the types of earthquakes and river systems typical of the Mississippi River systems, including the Ohio and Illinois rivers.

They would have accepted what Moroni told Joseph; i.e., that the record was written and deposited not far from Joseph's home near Palmyra. They would see that the text describes pre-Columbian North America quite well.

The same scholars would embrace authentic Church history instead of revising it to de-correlate Cumorah. They would have upheld Joseph and Oliver as truthful, reliable and credible instead of framing them as ignorant speculators who misled the Church about Cumorah.

Latter-day Saints and other believers in the divine authenticity of the Book of Mormon would be united in their understanding of the text as an actual history of real people.

But this is not our universe.

But it could be.