The youtube channel Mormon Book Reviews has released a review of Infinite Goodness that everyone should watch. 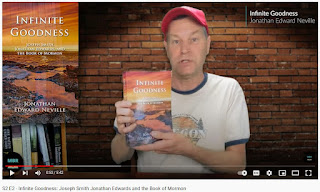 https://www.youtube.com/watch?v=BeAfovfEu9A
As Steve says in the review, this is the time for Latter-day Saints to recognize our commonality with other Christians.
The Church just released a booklet on Muslims that emphasizes our shared beliefs, values and lifestyles. This pursuit of unity is part of the "ongoing Restoration" that Church leaders have been explaining.
Understanding the connections between Jonathan Edwards, Joseph Smith, and the Book of Mormon will accomplish a similar unity with fellow Christians.
Few Latter-day Saints are familiar with Jonathan Edwards, so they don't understand the significance of these connections. There is a brief introduction here:
https://www.mobom.org/jonathan-edwards
The book Infinite Goodness is a summary and overview of the topic. My publisher told me to keep it as short as possible because people don't want thick books, but there's a lot more to come. You'll see that the book addresses many topics, including hymns, polygamy, the role of Elias, and more.
_____
In the early days of the Church, Mormon missionaries sought to distinguish the Restoration from the rest of Christianity, from "Hindoos," from Islam, etc.
That made sense at the time because they had to sharpen the distinctions to persuade people to leave their existing churches.
Nevertheless, Joseph Smith explained an important point when asked about the his beliefs.

Question 20th. What are the fundamental principles of your religion.

Answer. The fundamental principles of our religion is the testimony of the apostles and prophets concerning Jesus Christ, “that he died, was buried, and rose again the third day, and ascended up into heaven;” and all other things are only appendages to these, which pertain to our religion.

But in connection with these, we believe in the gift of the Holy Ghost, the power of faith, the enjoyment of the spiritual gifts according to the will of God, the restoration of the house of Israel, and the final triumph of truth.

At this stage of the Restoration, we focus on unity, not division.

This is the time when all Latter-day Saints are called upon to pursue the ideals of the 13th Article of Faith:

13 We believe in being honest, true, chaste, benevolent, virtuous, and in doing good to all men; indeed, we may say that we follow the admonition of Paul—We believe all things, we hope all things, we have endured many things, and hope to be able to endure all things. If there is anything virtuous, lovely, or of good report or praiseworthy, we seek after these things.