Isaiah on Lehi's route to America

I'm cross-posting this from my Gospel Doctrine blog because of the different readership. Hopefully this can be one more step toward reaching a consensus.

Lesson 5 addressed the question of which way Lehi sailed when he left the Arabian peninsula.

As a reminder, here is the graphic from that lesson.

In my analysis, I discussed what Nephi wrote about the voyage, including their preparations. I proposed that Lehi sailed west, down the coast of Africa, and across the Atlantic to North America. I also discussed the voyage of the Phoenicia as a modern-day example of Lehi's voyage would have taken place, using actual ocean current, prevailing winds, and even 600 BC technology.

Apart from what Nephi wrote, there is another reason to conclude that Lehi's group sailed west instead of east.

Anciently, Ethiopia (also called Cush) was the land south of Egypt, as shown in this maps. 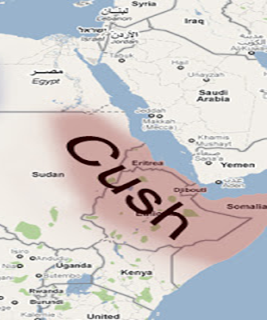 The Israelites to whom Isaiah was speaking were not familiar with Ethiopia; it was just the undefined area south of Egypt.

It's exactly where Lehi sailed when he left the Arabian peninsula, as you can see from the map above.

Brother Ludlow gives an alternative explanation of the Hebrew:

"the identification of the 'land shadowing with wings' with America gives us a basis for studying the rest of the chapter. The remainder of verse 1 and the first part of verse 2 can be translated as follows:

Which land is [far] beyond the rivers of Cush [Africa]. He sends out envoys by sea and in swift vessels of reeds over the face of the waters." (VLL translation)

Brother Ludlow's explanation clarifies that Isaiah is referring to the land beyond the oceans of Africa--not the oceans of India. It's an important distinction and clarification.

Although Nephi never directly quotes from Isaiah 18, surely he was familiar with these passages. He and Lehi would have realized that the promised land, where the Lord would raise the gospel ensign in the latter days, was "beyond the oceans of Africa" and so he knew which direction to sail.

With the benefit of hindsight, we should be able to figure this out ourselves.

(I think some of Nephi's prophecies that don't quote Isaiah directly are paraphrasing or referring to Isaiah 18, but I don't have time to explain that here. Just look at a "nation scattered" and realize that the phrase "whose land the rivers have spoiled" is usually translated as "whose land the rivers divide" or "whose land is divided by rivers." Then recall that Mormon tells us the land of Zarahemla and the land of Nephi were "nearly surrounded by water" and you'll get the idea.)

Woe to the land shadowing with wings, which is beyond the rivers of Ethiopia : that sendeth ambassadors by the sea, even in vessels of bulrushes upon the waters, saying go, ye swift messengers, to a nation scattered and peeled, to a people terrible from their beginning hitherto, a nation meted out and trodden down, whose land the rivers have spoiled ! All ye inhabitants of the world, and dwellers on the earth see ye, when he lifteth up an ensign on the mountains ; and when he bloweth the trumpet hear ye."

Brother Ludlow's book discusses the interpretation aspects of this in more detail. The book Understanding Isaiah by Don and Jay Parry also has a good discussion on the topic.

One blogger has noted this: Joseph Fielding Smith said the following in the April 1966 General Conference, "America was discovered because the Lord willed it. The gospel was restored in America, rather than in some other land because the Lord willed it. This is the land "shadowing with wings" spoken of by Isaiah that today is sending ambassadors by the sea to a nation scattered and peeled, which at one time was terrible in the beginning (Isaiah 18:1-2). Now that nation is being gathered, and once again they shall be in favor with the Lord." (Joseph Fielding Smith, Conference Report, April 1966, pp. 12-15).

Since I'm working on a Church history book that will be released soon, those interested in detail might enjoy this little tidbit.

Hyrum Smith's statement is widely quoted as if it was the first allusion to Isaiah 18 that connects the passage with North America. However, as near as I can tell, he got the idea from Benjamin Winchester.

In the April 1, 1841, Gospel Reflector, Winchester quoted Isaiah 18:1-3 and then wrote the following long explanation. Before quoting it, I note two things. First, Winchester was providing his own translation of the Hebrew characters, which he reproduced in the Gospel Reflector but I don't show here. Second, he was thinking of Ethiopia as North Africa, which makes sense because he's thinking of Isaiah looking at it from Palestine, but I don't think Winchester was right about that. Obviously, one can't see over the horizon from Palestine. Instead, I think Isaiah was anticipating Lehi's journey to the promised land, as I explained above.

Still, Winchester's overlooked commentary has been very influential because of the impact it had on Hyrum Smith.

So here is Winchester in his own words:

That the residence of Isaiah was in Palestine no one disputes : therefore in order to comprehend this saying it,is necessary for us to imagine ourselves standing on that land, and then look in the direction of Ethiopia (consequently West,) to find a land beyond the rivers of Ethiopia. The North part of Africa, or the Barbary States were anciently called Ethiopia. The land of America is the only land that will answer his description. However we opine that an improvement in the translation of the above may be made with propriety, which will throw much more light upon the subject.

We read, or translate it thus :

Ho! to a land in the shadow (or symbol or the appearance) of wings, Which is beyond the rivers of Ethiopia.” Now it is probable that he saw this land in a vision, and indeed, whoever will look at the map of North and South America, will discover that they are very much in the shape of the wings of a bird : hence he breaks out with the interjection, " Ho ! to a land, &c.," and then predicts what shall be done :
" That sendeth ambassadors by the sea, even in vessels of [Hebrew characters]  papyrus upon the waters." Historians say that papyrus was a flagy shrub that anciently growed in the marshes near the river Nile, and that the bark of it was used to make ropes and sails for ships, covering and wearing apparel, &c. : and the roots were used for fuel, and building ships. The word vessel in the bible is ambiguous ; therefore, he used the word papyrus to signify water crafts, sufficient to escort the servants of God over the sea.

Now reader the subject is perfectly plain ; and as the prophetic vision rolled before the prophet's mind, he saw first, a land in the shape of wings, beyond the rivers of Ethiopia, which is the land of America, for the most obvious reason, there is no other land in the shape of wings beyond Ethiopia. And his saying the rivers of Ethiopia, instead of the land, places the direction immediately West from Jerusalem.

Second, he saw that the ambassadors of the Lord should be sent from this land ; third, that they should be transported over the sea in vessels or ships, of what he called papyrus, perhaps for the want of a better term to express his meaning, (for the present model of ships was then unknown.) It is probable that this generation, in the vision with all its works was present before him ; therefore, he saw our majestic ships with all their sails set, which looked to him like the sails that were anciently made of papyrus- Fourth, he said they should be sent from this land to a nation that was terrible from the beginning ; but hitherto meted out and trodden down. The Israelites were a terrible people from the beginning; but they have been trodden down, and scattered to the islands of the sea, and among all the nations of the earth. Thus the servants of God are to go from this land to all nations to proclaim the gospel, and gather Israel. Fifth, he describes this land as being the place where the ensign was to be lifted up, and where the gospel trump should be blown first, in the last days.

He also said, " all the inhabitants of the earth see ye, and when he bloweth the trumpet hear ye." Indeed, the Book of Mormon has come forth on this land, and the Lord has sent his angel to confer the holy priesthood upon his servants once more, or renewed the gospel dispensation, and organized his kingdom, &c., and in a word the Lord's banner is exposed to view upon this land, and all men are invited to both see, and hear. This corresponds with what the prophet
says in another place, which we have before quoted, " And he will lift up an ensign from afar and will hiss unto them from the end of the earth, and they shall come with speed swiftly." Some have enquired, saying, if Israel is to be gathered upon the land of their fathers, why not this ensign be raised upon the land of Canaan where the prophets received their revelations, instead of this land ?

Answer: because the scriptures say, that it shall be done here — on a land beyond the rivers of Ethiopia. Indeed, this is a land from whence the ambassadors of the Lord shall go forth to all nations ; and instead of missionaries being sent here from Europe by divine direction, the servants of God shall be sent from this land. Some of those ships that
the prophet saw have already escorted some of the servants of God to other nations, and ere long they will go to earth's remotest bounds.

It is the work of Jehovah and he will roll it forth till his covenant people are gathered, and the way prepared for the kingdom of heaven. This is the land of Joseph — the place where Zion will be located and established for the Millennium*. The law of God shall go forth from this to all nations — the work of deliverance has commenced here to deliver Israel from captivity, and turn ungodliness from Jacob.

* We shall hereafter prove from the scriptures that this Zion is to be located in America.
Posted by jonathan3d at 1:51 PM