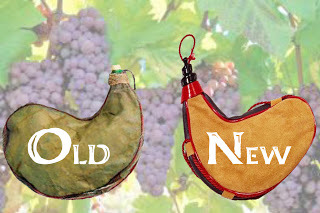 When I was a teenager, our family visited Spain. One of my brothers bought a traditional wine skin bottle that was pretty fun to drink out of because you could squirt the liquid a long distance and try to catch it in your mouth (we didn't use it for wine). However, it takes ongoing effort and care to keep an authentic goat skin flexible; most people don't have the patience. After a while the wineskins get brittle and start to crack. As Mark 2:22 points out, an old wineskin can burst if you put new wine into it.

I analogize this to the new understanding of Church history and Book of Mormon historicity that I've been discussing on these blogs.

In the spirit of Mark 2:22, we're offering new wine, and people have to decide if they are old bottles or new bottles. The North American geography is new wine for many people, and in some cases, "the new wine doth burst the bottles, and the wine is spilled." But unlike the ruined container in the parable, people can choose whether to be flexible and open--new bottles--or rigid and fragile--old bottles.

Lately I've had people tell me they think it will take a new generation to embrace the North American geography because the older generations have been so deeply indoctrinated in the Mesoamerican theory. But I don't find that at all. I know older people who are enthusiastic about the North American setting, and I know young people--well, college-age--who resist it because it's not what they were taught in Primary, Seminary, Institute, BYU, etc. So I don't think it's a matter of age, but a matter of temperament and openness.

One way to tell if you, or anyone else, is an old bottle or a new bottle is whether, when you encounter a new idea, you first seek to oppose or to understand. I'm not going to write a sermon or essay about this, but think about how Ammon found acceptance among the Lamanites.

With regard to Book of Mormon geography, if you've long believed in, or at least accepted, the Mesoamerican theory of geography, you've also accepted the so-called "Two-Cumorah" theory; i.e., that the Cumorah in New York where Joseph got the plates was not the Cumorah mentioned in the Book of Mormon, the scene of the final Jaredite and Nephite battles. That Cumorah is somewhere in Mesoamerica.

So how do you react when you learn about what Oliver Cowdery wrote about this specific topic in Letter VII? Oliver he said it was a fact that the final battles took place in New York, and that Moroni said the record was written and deposited not far from Joseph's home. Do you oppose what he wrote? Do you insist he was mistaken, or speculating, or merely repeating a myth? Or do you seek to understand why Joseph Smith had his scribes copy Oliver's statement into his own journal, why Joseph had Letter VII republished multiple times during his lifetime, and why the single New York Cumorah was unequivocally accepted by every Church leader for a hundred years?

Another example. When you hear that the Book of Mormon text describes North America, do you try to understand that concept or do you reject it because you've been taught all your life to think in terms of an hourglass shape, with the narrow neck meaning Central America (as if Mormon was using Google earth to keep track of things)? Do you strain at a gnat and swallow a camel? Do you impose requirements for the North American setting that you would never think to impose on the Mesoamerican setting? Do you seek illusory "correspondences" to make up for the total absence of Mesoamerican culture, terminology, and biomes in the text? Do you proceed on the basis that Joseph Smith translated the text wrong because he didn't know what a tapir or jaguar or a jade stone was?

In the pursuit of consensus, I encourage everyone to understand all sides of the issue. The more people know about all the issues, the more likely we will come to a consensus.
Posted by jonathan3d at 2:10 PM