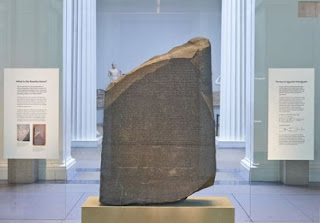 An exhibition on the Rosetta stone is underway at the British museum:

A curator explains that the text was written first in Greek, then translated into Demotic, and then into hieroglyphs.

I have a small replica of the Rosetta stone that I purchased at the British Museum many years ago. I keep it on my desk because it is reminiscent of the way that Mormon and Moroni abridged their record into "reformed Egyptian" because it was more compressed, even if less precise.

30 Behold, I speak unto you as though I spake from the dead; for I know that ye shall have my words.

32 And now, behold, we have written this record according to our knowledge, in the characters which are called among us the reformed Egyptian, being handed down and altered by us, according to our manner of speech.