In seeking consensus about Book of Mormon geography, I've pointed out that the text never mentions pyramids, jungles, Mayans, tapirs, etc. No one reading the text would think of Central America on the basis of the words alone.

To "see" Mesoamerica in the Book of Mormon, you have to be trained to see it. You have to have Mesomania. You have to have Arnold Friberg paintings inserted into the missionary and foreign-language editions, along with the painting of Christ visiting the Nephites among ruined Mayan temples with Chichen Itza in the background.

Let's look at pyramids for a moment.

Mesomania teaches that the Book of Mormon does refer to pyramids. Joseph just used the wrong word when he translated the plates. He dictated "tower" instead of "pyramid."

Or maybe Oliver Cowdery wrote down the wrong word and Joseph didn't notice?

IOW, when you read with Mesomania lenses, substitute the word "pyramid" every time you see "tower" and you'll find your Mesoamerican setting with no problems. Now you're reading the correct translation.

Here's one of my favorite examples: 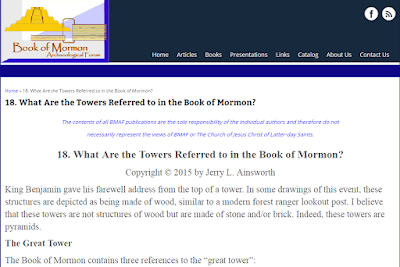 If you have time, you should go read this article. It's awesome. http://bmaf.org/node/598

Basically, the argument is that the "great tower" referenced three times in the Book of Mormon must be the "city and tower" described in Genesis 11:3-4. In that passage, people made bricks because they had no stone. They used "slime" for mortar.

Now, notice the sleight-of-hand typical of most Mesoamerican articles:

In the Bible, the people made bricks because they didn't have stone. Hundreds if not thousands of years later in Mesoamerica, people built temples out of stone. There are a few instances of using kiln-fired bricks, such as the ones the author mentions and the Comalcalco site, but this dates to Late Classic (post-Book of Mormon times).

Now, ask yourself, can you think of a human civilization that doesn't use stone or bricks for construction? This is yet another of the illusory correspondences between what Mesoamerican activists see in the text (in this case, pyramids) and fairly ubiquitous elements of human societies everywhere.

But maybe you're thinking the Hopewell and Adena, who relied mainly on earthworks and timbers. If so, then you're heading in the right direction.

Because the Book of Mormon never once mentions the people using stones or bricks for buildings!

This should be too obvious to have to repeat, but not only does the Book of Mormon never mention pyramids, it doesn't even mention stone buildings!

The BMAF article nevertheless continues to claim that every mention of the word "tower" in the text actually should have been translated as "pyramid."

This is really fun. This Mesomania-inspired thinking has brought us images such as this: 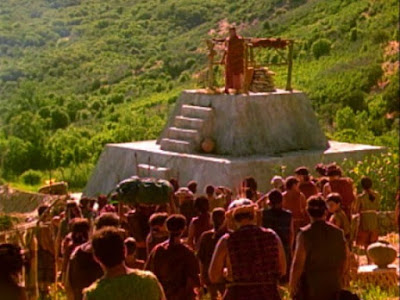 Here we have Nephi building his own pyramid right in his garden, near the highway! It's a spectacular idea. Can't you envision Nephi hauling these massive stones to his garden, carving the steps, etc.? He must have been more buff than the Arnold Friberg version.

Here's another version of Nephi that's so ridiculous I wouldn't include it except to show how far some people take the Mesoamerican theory. 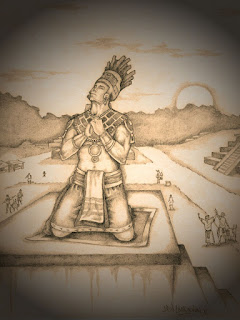 And, we have King Benjamin making his people build him a pyramid in about a day. The Nephites were the fastest stoneworkers in antiquity, no doubt.

I'm not kidding about this. There are several Mesoamerican advocates who actually claim the towers mentioned in connection with Nephi and King Benjamin were pyramids. They think this constitutes proof that the Book of Mormon took place in Mesoamerica.

If you have Mesomania, this constitutes proof of the Mesoamerican setting:

The Book of Mormon mentions towers.

Maybe my favorite is the claim that the Nephites were building pyramid towers near the temple pyramids. Notice in the BMAF logo that there is a temple on top of the pyramid. Every Mesomania organization uses a similar motive, including the Ancient America Foundation for which Book of Mormon Central is the front. But in Mosiah 11:12, King Noah "built a tower near the temple; yeah, a very high tower." So, if you've got Mesomania, the temple is already on top of a pyramid, but that one wasn't high enough, so Noah built an even bigger pyramid "near" the temple pyramid.

Maybe now you understand why it's so easy for the Mesoamerican scholars to "see" Mesomaerica whenever they read the text of the Book of Mormon. You just substitute a few words and voila, you've got Mayans instead of Nephites on every page.
_______________________

That might look like circular reasoning to you, but to an LDS PhD or JD scholar, it's sound reasoning based on facts.

Here's an artist's depiction of a common sense tower: 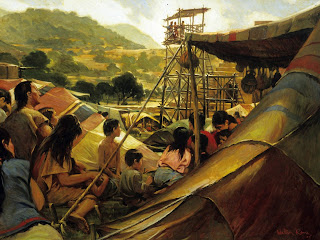 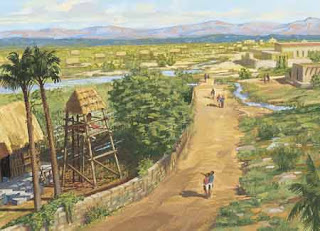 Back in the day, when Mesomania hadn't gone completely wild and people were still sorting through different possibilities, there were actually some good articles on this question. Scholars made connections with actual Hebrews instead of claiming Nephi and King Benjamin used the construction techniques they learned from the tower of Babel.

For example, some noticed that Ezra "stood upon a pulpit of wood" when he read the law to the people. Nehemiah 8:4. This was the platform used during the Feast of Tabernacles, which has also been compared with King Benjamin's feast. In 2 Kings, the king stood on pillar-like platforms as described here.

You might wonder about the term "pulpit" in the KJV.

According to Strong's Concordance, here, the Hebrew word used in Nehemiah 8:4, migdal of miigdalah, is normally translated as "tower." It's the same term used in Geneses 11:4-5, but here in Nehemiah it is definitely made of wood.

On one hand, you have Mesoamerican proponents insisting that the term "tower" in the Book of Mormon actually means "stone pyramid" because the writers referred to the tower of Babel as a "great tower." You have Nephi building a stone pyramid in his garden and King Benjamin having his people build him temporary a stone pyramid so he can teach them the law.

On the other hand, you have North American proponents relating the term to the Biblical use of wooden towers to preach to the people, as found in Nehemiah 8.

What do you think?