There's a big difference between trying to persuade people, trying to educate people, and trying to change minds by arguing with them.

Readers here know that I frequently declare that as far as I'm concerned, people can believe whatever they want. I don't want to persuade people because persuasion techniques can involve manipulating facts (especially by hiding or censoring unfavorable facts). Arguing with people is pointless because people naturally resist any effort to change their minds.

But people usually are eager to learn new things and make up their own minds.

That's why my objective is to enable and empower people through education and rational analysis so they can make their own informed decisions. 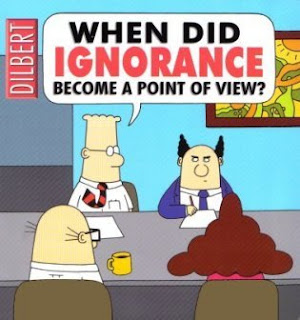 It's not a difficult distinction, but sometimes people who feel threatened by evidence that contradicts their beliefs conflate the concepts.

For example, a while back a well-known LDS author/educator, former Mission President, etc., sent an email to his list claiming that I was lying to people when I said I wasn't trying to persuade anyone of anything. I had brought up facts that contradicted what he had been teaching for his entire career. Two people on his list forwarded his email to me. I contacted him, and he apologized, but he didn't send a follow-up to his list.

I bring this up because I saw a nice article about the futility of arguing that readers here will enjoy. The author, a former professional boxer, makes some good points, although he unintentionally seems to justify a "closed-mind" approach to life, so I wouldn't read the article uncritically.

Still, there are some thoughtful insights worth considering.

It's especially important to apply the concepts to ourselves. Are we the type of people for whom "the pain of ignorance is greater than the satisfaction of stubbornness," so what we are eager to improve our lives by readily accepting new information in a positive context, or are we more intent on confirming our biases regardless?

In the gospel context, I think more information is always better than less information. This is especially true for Church history issues, as we've discussed many times.

No matter how well-crafted your argument…

No matter how painfully obvious it is that your stance on the matter is, practically speaking, the correct one…

You will never convince someone who isn’t interested in being convinced.

Occasionally you may come across the rare individual who changes their mind in the face of new evidence, but these types of people go into a situation with an open mind and loosely held beliefs. Maybe calling their beliefs “loosely held” isn’t quite correct.

It’s more accurate to say that they realize they could be completely incorrect and for these people, the pain of ignorance is greater than the satisfaction of stubbornness.

The longer it takes you to realize that most people are never going to change their minds, the longer it will take you to thrive in this environment.

Until you get this, you will spend your days raging on the internet and debating in person over things that not only don’t matter, but even if they did, there’s nothing you can do about them and no prize you win for convincing the opposition otherwise.