I think the greatest obstacle to reaching consensus among Mormons regarding Book of Mormon geography is sunk costs.


Any believing Mormon who wanted to understand Book of Mormon geography and was starting from scratch would start with the teachings of the prophets. This means Cumorah is in New York. The New York Cumorah has been taught so clearly, so persistently and so consistently for over 150 years by Church leaders in official publications and General Conference that it is really not subject to interpretation.

That is, if we're starting from scratch. IOW, if we don't have sunk costs.

With Cumorah in New York, there are many possible options for other Book of Mormon locations, which is why the Brethren have never taken a firm position on that question. The Brethren have consistently taught both that (i) Cumorah is in New York, and (ii) beyond Cumorah, we can't yet say for sure where other sites are.

If we were starting from scratch, we would start with the prophets' teachings about Cumorah in New York and then assess the text in light of relevant archaeology, anthropology, geology, geography. (I think we'd end up agreeing on something close to Moroni's America, but I'm happy to consider any theory of geography that is consistent with the teachings of the prophets about the New York Cumorah.)

But in reality, of course, most LDS do not start from scratch. From a young age (or from the time they joined the Church), their minds have been imprinted by M2C. 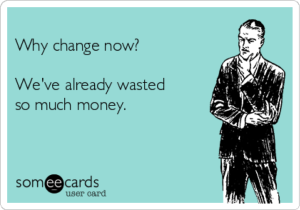 Because the M2C intellectuals have invested so much time, effort and resources into developing and promoting the Mesoamerican/two-Cumorahs theory, they have done everything possible to establish M2C in the Church. They teach it at BYU and CES. The Correlation Department enforces M2C throughout the Church.

And because of these sunk costs, the psychology of the M2C intellectuals prevents them from abandoning their theories.

And yet, this is an irrational approach.

Their past time, effort and resources are "sunk costs" that can't be recovered, whether they continue to promote M2C or not.

Worse, the more time and effort they spend on M2C in the future, the more unrecoverable investment they are sinking into M2C.

In economics, the term "sunk costs" refers to money that has been spent and cannot be retrieved. Theoretically, people should ignore sunk costs. "Don't cry over spilt milk," etc.

But in reality, people have trouble ignoring sunk costs.

In his book Misbehaving: The Making of Behavioral Economics, Richard H. Thaler explains how he has collected dozens of examples of people paying attention to sunk costs, even though they should not. A friend pays $1,000 to join a tennis club and develops tennis elbow, but keeps playing anyway (aggravating the injury) because he "invested" the $1,000. "Humans have trouble with this concept... sunk costs linger and become another SIF {supposedly irrelevant factor)... Paying $100 for a ticket to a concert that you do not attend feels a lot like losing $100."

In another example, suppose you pay for a pair of shoes you can't return, but they don't fit. "The more you paid, the more pain you will bear before you stop wearing them, and the longer they will take up room in your closet."

In the same way, health club membership fees "can help me overcome my inertia... attendance at the club jumps the month after the bill arrives, then tails off over time until the next bill arrives." This is called "payment depreciation," showing that the effects of sunk costs wear off over time, but right after the costs are sunk, people try to keep from "losing" their investment by using their club memberships.
_____

Imagine the situation of the M2C intellectuals who have spent years obtaining a PhD in an M2C-related field such as Mesoamerican studies. Put yourself in their place. You have written articles and books on the subject. You have taught classes and seminars, spoken at professional conferences, etc. Maybe most significantly, you have taught thousands of LDS youth at BYU or CES that the Book of Mormon took place in Mesoamerica.

Such efforts are enormous costs, not only in time and money, but also in self-image and reputation.

Then, after years of effort, you come across Letter VII. You read the consistent, persistent teachings of the prophets about the New York Cumorah. Because of the sunk costs fallacy, you attribute all of that to the "mere opinions" of the prophets.

But then you realize that President Ezra Taft Benson was talking about you when he said, in General Conference, The learned may feel the prophet is only inspired when he agrees with them, otherwise the prophet is just giving his opinion—speaking as a man...

The sunk costs problem was famously described by Leo Tolstoy at the beginning of chapter 14 in What Is Art? I'll organize it for clarity:

I KNOW that most men, not only those considered clever,
but even those who are very clever and capable of understanding most difficult scientific, mathematical or philosophic problems
can very seldom discern (or accept) even the simplest and most obvious truth
if it be such as to oblige them to admit the falsity of conclusions they have formed, perhaps with much difficulty,
conclusions
(i) of which they have delighted in explaining to colleagues,
(ii) which they have proudly taught to others, and
(iii) which they woven, thread by thread, into the fabric of their lives.

All three of the costs Tolstoy listed here have been sunk, at great expense, by the M2C intellectuals at BYU/CES.

The remedy, of course, is recognizing that sunk costs are sunk. But that is very, very difficult for people even in everyday activities such as buying shoes that don't fit or tickets to an event we can't attend.

To some degree, perhaps the remedy involves a degree of humility and deference to the prophets.

Nevertheless, the difficult of the remedy is not a justification for continuing to sink more costs.

In my view, any Latter-day Saint who continues to teach M2C, without at least also telling students/readers about the teachings of the prophets regarding the New York Cumorah in Letter VII and General Conference, is being dishonest and is violating his/her position of trust.
_____

I realize this is all easy for me to say. When I realized M2C was not only irrational and counterfactual, but constituted a direct repudiation of the prophets, I didn't have much of a sunk costs problem. True, I had spent a lot of time reading, and hundreds, probably thousands, of dollars buying, publications from the citation cartel (BYU Studies, FARMS, Interpreter, etc.). I had taught M2C on my mission and in Church callings. Psychologically, I had the same inertia against change that everyone does.

But for me, it was well worth it to align my views to what the prophets have taught about the New York Cumorah.

It has been a bonus to realize that the text itself, as well as archaeology, anthropology, geology and geography, corroborate and support what the prophets have taught, while at the same time they contradict M2C.

All I ask here is that everyone involved with teaching or studying the Book of Mormon take a moment to think about whether we are teaching something because of the sunk costs fallacy.

By now, the only excuse for teaching M2C is the irrational effort to justify (and reclaim) sunk costs.
Posted by jonathan3d at 1:52 PM