I haven't intended this blog to focus just on KnoWhys from Book of Mormon Central, but with so many things going on, I am only taking the time to comment about missed opportunities that are especially unfortunate.

KnoWhy #136 asks, "Why Did Alma Wish To Speak “With The Trump Of God”? It's a wonderful KnoWhy about the jubilee year, the sabbatical years, and the trumpet of the jubilee. 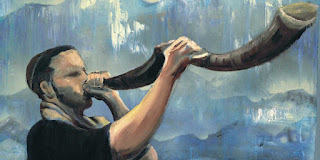 They include this depiction of a man blowing a horn. Then they write, "In the land of Israel, the trumpets would probably have been rams horns,10 but other kinds of horns could have been used,11 and some scholars have argued that loud shouting could also suffice.12"

Let's think about that a moment. Alma wants to "speak with the trump of God" and he's supposed to really mean that he wants to shout loudly? Seriously?

Now, look at the footnotes.

(Okay, you probably don't want to read them, so I put them at the bottom of this post. I'll summarize them first.

Note 10 points out that "trumpets" means "the horn of the ram" or "trumpets of rams." Good.

Note 11 gives a list of alternatives to ram horns that include horns of antelope, ibex, oryx, and other goad species. We're still good.

Even "trumpets of hammered metal" are okay. So far, so good.

Except you don't have those items in Mesoamerica, so instead we get a list of references to people in Mesoamerica using conch shells! I'm not kidding. Read the footnote yourself if you don't believe me. So now we're supposed to think Alma is observing Israelite sabbatical years, including the jubilee year, but when he refers to the "trump of God" he means a conch shell, not a ram's horn.

Note 12 tries to say we shouldn't worry about horns anyway, because Alma equates "the trump of God" with "a voice to shake the earth" even "the voice of thunder."

Here's the missed opportunity. They forgot to mention, or even cite in the footnotes, an actual goat horn made of copper discovered in an ancient burial mound right in Ohio.

The KnoWhy explains how the Nephites were observing Israelite traditions, the law of Moses, etc.

Then the KnoWhy explains that Hebrews in the land of Israel would have used rams horns as part of the celebration.

But then we learn that horns of other animals could be used. Even metal horns were mentioned in the Apocrypha. Okay, so substitutes were possible.

If we look at the North American setting, we find exactly what we would expect of a Hebrew culture; i.e., a metal horn that's a replica of a mountain goat (or other horned animal), exactly as the KnoWhy taught us.

Except the KnoWhy never once mentions this!

Instead, it focuses solely on Mesoamerica. In order to "see Mesoamerica in the Book of Mormon," the KnoWhy proposes that Alma was referring to a conch shell, or a trumpet made of wood, clay or gourd.

My copy of the Book of Mormon mentions these species this many times:

Alma 14:29 even compares the people who fled from Alma himself to goats!

Apparently, 15 chapters later in Alma 29, Alma has forgotten all about goats and instead wants to blow a conch shell.

I know, I'm having a little fun with this, but seriously, why would a neutral web page overlook direct evidence that corroborates the Hebrew culture in Ancient America in favor of an attempt to portray Alma blowing a conch shell? I think we all know the answer to that.

And we should be glad they didn't hire an artist to depict Alma blowing a conch shell.

But I don't think there's any excuse for missing opportunities such as this.

All I ask is for a little common-sense neutrality and inclusion of alternative perspectives.

11. There would seem to have been no reason why other types of horns, or perhaps even conch shells, could not have been used. Horns of antelope, ibex, oryx, and other goat species have also been used. See Jeremy Montagu, The Shofar: Its History and Use (New York, NY: Rowman and Littlefield, 2015), passim. Sirach 50:16, in the Apocrypha, even describes the use of “trumpets of hammered metal” (NRSV), illustrating that trumpets need not be made from the horns of an animal. Trumpets were also used in Mesoamerican rituals, where they were commonly made from the conch shell, though they were also sometimes “made of wood, clay, or gourd.” Anna Stacy, “Of the Same Stuff as Gods: Musical Instruments among the Classic Maya,” Colligate Journal of Anthropology 2 (May 2014), online at http://anthrojournal.com. Jogre Perez de Lara, The Cultures of Ancient Mexico: Photographs from the Natural Museum of Anthropology, images 115, 148, 150, 151, 152, 153, 154 show conch trumpets from Mexico dated to the Late Preclassic/Early Classic period. The Kimball Art Museum has a conch trumpet from the Central Lowland Maya area dated to AD 250–400, online at http://www.mesoweb.com/lords/power04.html. Conch trumpets can also be seen in Classic Maya vases, such as K3247 and K4336, online at http://research.mayavase.com/kerrmaya.html. Also see John L. Sorenson, Images of Ancient America: Visualizing Book of Mormon Life (Provo, UT: FARMS, 1998), 178–179.

12. According to David J. Larsen, “Angels Among Us: The Use of Old Testament Passages as Inspiration for Temple Themes in the Dead Sea Scrolls,” Studies in the Bible and Antiquity 5 (2013): 101, “In the biblical texts, the teru’ah is a shout or a trumpet blast, usually given in the context of a temple ritual on a festival day, such as the Feast of Trumpets or the Day of Atonement.” David J. Larsen, “From Dust to Exalted Crown: Royal and Temple Themes Common to the Psalms and the Dead Sea Scrolls,” in Temple Insights: Proceedings of the Interpreter Matthew B. Brown Memorial Conference—“The Temple on Mount Zion,” 22 September 2012, ed. William J. Hamblin and David Rolph Seely (Salt Lake and Orem, UT: Eborn Books and Interpreter Foundation, 2014), 151 noted that yom teruah means “day of shouting/trumpet blasts.” This nuance may be reflected in Alma’s words, where he equates the “trump of God” with “a voice to shake the earth,” even “the voice of thunder” (Alma 29:1–2).