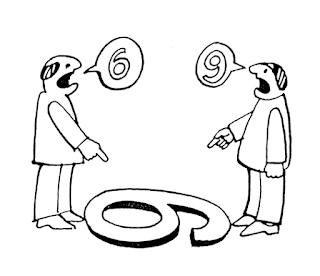 Questions about Book of Mormon geography are a means to an end. There is broad agreement on the ultimate objective of focusing on the Book of Mormon itself, in the sense of reading and applying its principles and teachings. For many of us, the geography and historicity issues improve our understanding of the text. These issues help many people dig into the text for themselves to find answers.

Although it would be great if everyone involved with Book of Mormon historicity and geography issues could reach agreement about the major issues, that seems unlikely for the foreseeable future. Instead, I think we can agree to disagree about a few basic issues.

One explanation of the phrase: The phrases "agree to disagree" or "agreeing to disagree" refer to "the resolution of a conflict (usually a debate or quarrel) whereby all parties tolerate but do not accept the opposing position(s)." 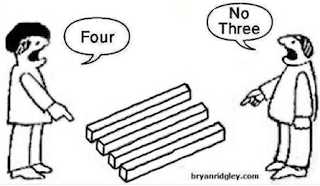 Agreements to disagree can result from different perspectives, as the cartoons illustrate. Walking around to the other side--a metaphor for seeing another person's perspective--can clarify the source of a disagreement. We may prefer the perspective we start with, but at least we understand why the other person sees things the way he/she does.

People tend to think evidence will resolve disagreements. Sometimes it does, but many times it does not. Economists disagree about the meaning of the same statistics they are all using. Although each juror has heard the exact same presentations about the evidence, juries often can't reach an agreement. Sports fans disagree about calls made during a game, even when they all watch the same replay.

One philosopher who has examined the question of why people can't agree concludes, "A multi-model understanding tells us that such differences may make conversion unlikely. Once we give up on conversion, we may look for those mutually beneficial accommodations that are possible even when models differ."

That's the kind of approach I hope everyone can take.

Here are a few issues that I've already agreed to disagree with others about.

Hill Cumorah. Because I accept Letter VII, I think there is only one Hill Cumorah and it is in New York. Others don't accept Letter VII and claim there are two Cumorahs, the one in New York being merely the place where Moroni deposited his plates, the other (where Mormon deposited the Nephite records) being somewhere else (Baja, Meso, Peru, etc.).

Book of Mormon terminology. Everyone likes to claim they are relying on the text, but of course they mean they are relying on their interpretation of the text. For example, I think terms such as narrow neck, narrow neck of land, small neck of land, narrow pass, narrow passage, and narrow strip of wilderness refer to different features. Others think they refer to the same thing, which leads to the common hourglass shape of many abstract and proposed Book of Mormon maps.

One thing that makes agreement to disagree so difficult in a gospel context is we all presumably have an objective of finding the truth. We're used to thinking "The truth shall make you free," and "truth is knowledge of things as they are, and as they were, and as they are to come."

I've had people tell me they are very uncomfortable with the idea of multiple views about Book of Mormon geography. That approach seems analogous to the approach to fiction generally; i.e., as long as we're imagining a setting, no one's imagination can be excluded from consideration.

I agree with those concerns, which is one reason why I think the New York Cumorah is so important.

But I think we need to let each individual make his/her own choice on each of these areas in which we agree to disagree. This is healthy, not only because it respects agency, but because it encourages individuals to dive into the text and decide for themselves.

A decision-tree exercise would help people navigate the issues. People who haven't considered these issues before, or who are bewildered by them, or who sense a state of cognitive dissonance, could find the process rewarding.
________________________

To make an informed choice, people must have access to information. This is why I consider the decades-long embargo on North American geography ideas to be counterproductive. I realize people are touchy about this subject, but ignoring the fact that major LDS publications (scholarly and popular books, articles, and web pages) have promoted the Mesoamerican theory to the exclusion of alternatives doesn't help. It's time to get real about this.

It is understandable, but not excusable, that the so-called consensus about the Mesoamerican theory has become the de facto standard. So far as I know, there is not a single editor of an LDS publication--not even a member of an editorial board--who accepts the North American setting. Mesoamerican ideas permeate CES faculty, including BYU. This has nothing to do with the merits, either. It's a result of a collective Groupthink approach to the topic, and it contradicts the Church's official policy of neutrality.

Most LDS people alive today have been raised with the Mesoamerican mindset. It permeates Church curriculum through the artwork. Editions of the Book of Mormon are still being published with Arnold Friberg's Mesoamerican paintings in them. People who accept the Mesoamerican model don't seem to realize how offensive the two-Cumorah theory is to thousands of members of the Church. The shorthand way to put it is that these faithful members agree with Joseph Fielding Smith and Oliver Cowdery.

More examples: every one of the affiliates of Book of Mormon Central promotes the Mesoamerican setting and opposes alternatives. I've specifically addressed BMAF and FairMormon as examples.

Consequently, members and investigators who are interested in these issues are presented with only one point of view: the Mesoamerican setting. When that doesn't work for them, they either leave (or stop seeing the missionaries) or they enter the state of cognitive dissonance that gnaws at them. Some people can live with cognitive dissonance, but others resolve it by eventually leaving, or finding an alternative that makes sense to them--such as the North American setting.

I realize some people think that offering alternative geography theories will create its own cognitive dissonance for people. Many people just want answers, without having to think much about it. Maybe most people. They think, "Why should I study this if the scholars can't even agree?"

That's why it would be ideal if all LDS scholars could agree on a setting that integrates all the known facts from Church history, the text itself, and the sciences. But until that point, openly acknowledging the agreements to disagree is far preferable to pretending there is only one legitimate setting because the scholars have reached a consensus about it.

There is a risk of replicating the Pharisees vs. Sadducees scenario. Awareness of that risk mitigates the likelihood of it becoming a reality.
____________________

What I propose is a set of points upon which we can agree to disagree. Each side explains its perspective on the points. Book of Mormon Central would be the host for the comparisons. To remain an affiliate, every organization would have to adopt a respectful approach towards non-Mesoamerican models. Individuals could continue to advocate one or another approach, but the editorial process would include representatives from other points of view to assure accuracy of published material when it purports to characterize the positions of alternative points of view. 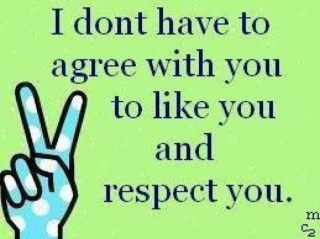