One of the challenges of reaching a consensus about Book of Mormon geography is the different ways people approach the problem. To compound it even more, there are different ways of thinking about the approaches!

From time to time I'll discuss thinking processes. For now I'll look at Edward de Bono's concept of Six Thinking Hats, the title of one of his books. You can get lots of information from googling the title.

Here is a summary from his web page:

You and your team members can learn how to separate thinking into six clear functions and roles. Each thinking role is identified with a colored symbolic "thinking hat." By mentally wearing and switching "hats," you can easily focus or redirect thoughts, the conversation, or the meeting. 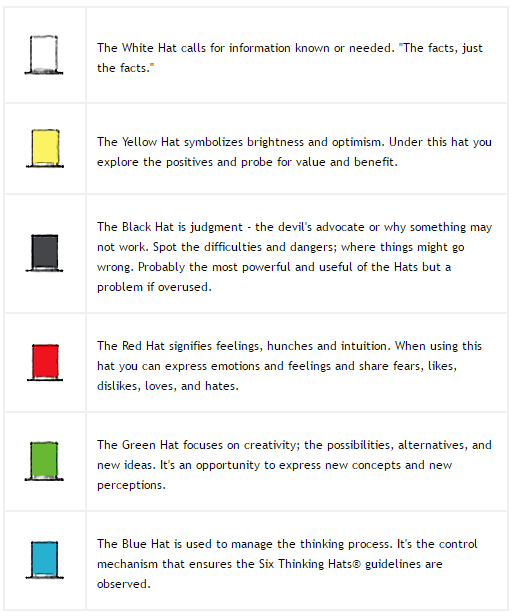 None of the hats is right or wrong; they are just different, each with an important contribution. From what I've observed in the discussions about Book of Mormon geography, there is a lot of Red Hat and Black Hat thinking. Not much White Hat or Green Hat thinking. I'd like to see more White Hat and Yellow Hat thinking, along with Green Hat.

In the interests of civility, I'll forego giving examples. They are easily found.

De Bono starts with the question, "How true is a fact?"

He explains: "Truth and facts are not as closely related as most people seem to imagine. Truth is related to a word-game system known as philosophy. Facts are related to checkable experience."

I keep hearing arguments framed like this: "Joseph Smith never received revelation about Book of Mormon geography." Of course, that's not a fact. It cannot be checked. It's an assumption designed to support a pre-existing belief (or hope) that supports a particular narrative. One could also characterize it as an inference from available evidence, but that's just as subjective as the assumption.

As de Bono explains, "White hat thinking is concerned with usable information." Usable information can be categorized on a "spectrum of likelihood" such as this list from p. 41:

He asks, "How far along this spectrum is it permissible to go with the white hat role? As before, the answer to that question lies in the framing of the information... The purpose of white hat thinking is to be practical. So we must be able to put forward all sorts of information. The key point is to frame it properly."
____________

Using the Joseph Smith example, what are known facts? One well-known Book of Mormon commentator likes to point out, with respect to the translation, that while we have evidence of what Joseph said the plates said, we don't have evidence of what was actually written on the plates. (I think that argument is fundamentally flawed, but it serves the purpose of making the translation fluid enough to accommodate whatever theory of geography one wants.)

A similar argument can be made with all of history. Recorded evidence is only evidence that such and such was recorded. It's not evidence that what was recorded was accurate, complete, or objective. We have to assess the credibility and reliability of the witness who wrote the record.

Joseph wrote only very brief accounts of his experiences. The most extensive account attributed to him is found in the Pearl of Great Price, titled Joseph Smith-History, but he didn't even write that. It was compiled by his scribes. We have accounts of him reading his history, and presumably he made changes. We have one example where his scribe suggested an addition, apparently taken from Letter VII, which Joseph accepted, but by and large, there is little documentary evidence of Joseph writing any of that history. Same with the Wentworth letter and other printed material. Unless it is holographic--in Joseph's handwriting--, or unless we have detailed accounts of his participation, we can't tell if he wrote it personally, or if he dictated it, instructed others to compile it, or left it completely to others to write without his even seeing the final product.

The next most extensive account is in the eight letters Oliver Cowdery wrote to W.W. Phelps. Because Oliver said he wrote the account with Joseph's assistance, and because so much of it contains details about Joseph's thought processes and Joseph's experiences to which Joseph was the only witness, there is good reason to conclude that Oliver got this information from Joseph directly. Other parts of the account include Oliver's own experiences, such as with John the Baptist. Throughout, Oliver was careful to distinguish between his speculation and what he called facts.
______

Applying white hat thinking to the accounts of Joseph's experiences should give us a list of facts that everyone involved with the discussion can agree on.

When we do this, we can realize that statements such as "Joseph never received revelation about Book of Mormon geography" are not facts.

A list of such "White Hat" facts would clarify what is fact and what is inference, assumption, hope, etc.