One of the challenges we face as Latter-day Saints is the diversity of voices in society and on the Internet that seek to persuade us of one thing or another.
Some voices reiterate and corroborate the teachings of the Restoration and the prophets. Other voices dispute, repudiate or distract from those teachings.
From time to time I comment on some of these, particularly focusing on bias confirmation.
There's nothing wrong with bias confirmation. It's ubiquitous. But it's not always explicit or even acknowledged.
For that reason, it's important to examine the biases of the various voices. Once we recognize bias confirmation, we can view the content more clearly for what it is and derive useful information and perspectives accordingly.
In American society, both left and right news sources engage in bias confirmation because viewers pay (or watch) specifically to confirm their biases. Fake news works for both sides because of bias confirmation.
The same thing takes place in discussions of religion.
For example, I have a separate blog about MormonStories, here:
https://mormonstoriesreviewed.blogspot.com/
IMO, MormonStories has devolved from an open forum for multiple perspectives into a uniformly critical site dedicated to confirming the biases of John Dehlin.
I have a blog about the Interpreter, here:
http://interpreterpeerreviews.blogspot.com/
IMO, like Mormonstories, the Interpreter is dedicated to confirming the biases of its founder, Dan the Interpreter, and it continues to adhere to his style of apologetics. About 70% of what the Interpreter publishes is fine, in the sense that it is insightful, useful, positive, etc. But about 30% of what the Interpreter publishes is problematic because it (i) promotes M2C and SITH, thereby undermining the credibility and reliability of Joseph Smith and Oliver Cowdery and/or (ii) resorts to logical and/or factual fallacies to make unpersuasive apologetic arguments.
As an example, this post looks at the tone typical of the Interpreter due to its FARMS origins.
http://interpreterpeerreviews.blogspot.com/2021/10/the-interpreter-in-nutshell.html
CES Letter is another site dedicated to confirming the biases of its founder, Jeremy Runnels. Once readers understand that, they can see the filters through which Runnels views Church history and doctrine. Unfortunately, many LDS apologists, including the M2C and SITH citation cartels, have accepted the same premises as Runnels on important topics.
I've addressed some of these issues here.
https://cesanswers.blogspot.com/
There are lots of non-religious voices that also corroborate or repudiate principles of the Restoration. For example, I like much of what Naval teaches. If you use twitter, you should follow Naval. 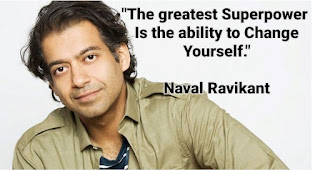 That statement is an explanation of what the Gospel empowers us to do.
I agree with Naval, but I also think we cannot change ourselves completely, or to the fullest extent we desire, all on our own. We need to help one another to become the people we want to become. Society can accomplish that to a degree, but the voluntary associations from within the Church, which gives us opportunities to serve others and become more self-reliant, empower us to work together to become united and work toward establishing Zion.
Beyond that, we also need spiritual enhancement and empowerment from God. All religions and many philosophies offer this in various ways, but the Restoration embraces all truth and offers aspirations that everyone can respond to.
Posted by jonathan3d at 11:06 AM