All the way back in 1970, Alvin Toffler provided an insight that is even more relevant today:

Technically, there are problems with this statement. For example, those who cannot read in the 21st century are still illiterate. But Toffler's claim suggests that a person with obsolete knowledge has just as much a disadvantage as a person who cannot read. Maybe more so.

The learn, unlearn, relearn paradigm explains not only how we improve by adapting to rapidly changing knowledge and understanding, but also how we improve by converting to different ways of thinking and believing. 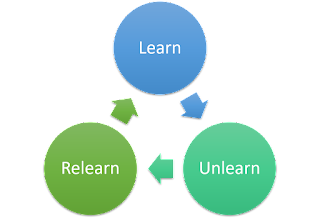 The paradigm can be applied in two ways. People learn (school, from parents, peers, school, etc.) When new knowledge comes along, if they are flexible and open, they unlearn what they had learned and relearn the new knowledge.

Everyone in the world has learned, from a young age, a framework for understanding the world. They learn language, customs, culture, and values, often (but not always) within a particular religious context.

As we mature, we learn new things that force us into a choice: we can incorporate new things into our existing framework, or we can unlearn that framework to adapt to the new things.

A couple of scriptures help apply these ideas:

54 And your minds in times past have been darkened because of unbelief, and because you have treated lightly the things you have received—
(Doctrine and Covenants 84:54)

1 Now, behold, I say unto you, that because you delivered up those writings which you had power given unto you to translate by the means of the Urim and Thummim, into the hands of a wicked man, you have lost them.
2 And you also lost your gift at the same time, and your mind became darkened.
3 Nevertheless, it is now restored unto you again; therefore see that you are faithful and continue on unto the finishing of the remainder of the work of translation as you have begun.
(Doctrine and Covenants 10:1–3)