What is a narrow pass?

One way to reach a "consensus" is to have everyone agree on definitions of terms.

But if the definitions are not required by the text, and especially if they aren't even likely, any resulting consensus is phony. Such a consensus is merely the result of circular thinking.

M2C intellectuals have reached a "consensus" by agreeing on definitions of terms. For example, they say every usage of the terms narrow pass and narrow passage refers to the same geographical feature that is found within the narrow neck of land, which they say is the same as the narrow neck and the small neck.

I'm not saying anyone is "right" or "wrong." People can interpret the text however they want. Here, I want to give some context for one of these terms: "narrow pass" so you can make your own informed decisions.
_____

The term "narrow" is subject to a variety of interpretations because it is relative; i.e., "narrow" compared with what? As an adjective, the term means "(especially of something that is considerably longer or higher than it is wide) of small width; limited in extent, amount, or scope; restricted."

As a noun, it means "a narrow channel connecting two larger areas of water," but in the Book of Mormon it is used as an adjective.

One example of the term suggests a common usage in Joseph Smith's environment.

In 1779, Caleb Brewster wrote a letter to Benjamin Tallmadge. Brewster was a spy for George Washington in the Revolutionary War. He was reporting his observations from Long Island, New York when he wrote:

Dear Sir. I have returned from the Island this day. Genl. Erskine remains yet at Southampton. He has been reininfoced [sic] to the number of 2500. They have three redoubts at South and East Hampton and are heaving up works at Canoe Place at a narrow pass before you get into South Hampton. They are building a number of flat bottom boats. There went a number of carpenters down last week to South Hampton. It is thought by the inhabitants that they will cross over to New London after the Continental Frigates.

Those familiar with Long Island will recognize these place names (I've visited Riverhead, where my grandparents lived, and I have ancestors who lived in New York in the 1600s).

Here's a map of the area: 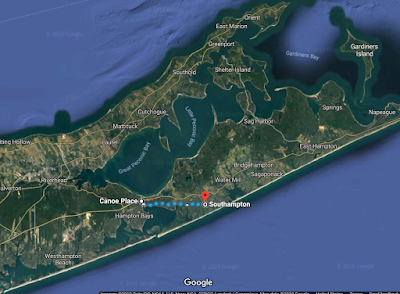 The distance from Canoe Place, where the British were "heaving up works" and South Hampton, where they had a redoubt or stronghold, is about 6.4 miles.

The pass is a little over 3 miles long, depending on where you place the two ends.

"Narrow pass" strikes me as a good description of this geographical feature.

There are lots of features that constitute "narrow passes" throughout the world. On Long Island itself, there are several. That's why Brewster qualified the term "narrow pass" by referring to Canoe Place and South Hampton so his reader would know the location of the pass.

In the Midwestern U.S. and western New York, there are innumerable features that could be described as a "narrow pass" in relation to water (Great Lakes or seas, lakes, rivers, etc.) and land (mountains, ravines, etc.). It is the large number of features that align with the Book of Mormon description that make it impossible to say, with certainty, which real-world feature corresponds to a particular passage in the Book of Mormon.

But many work well with the New York Cumorah.
_____

Now, for comparison sake, let's look at how the M2C citation cartel interprets the term "narrow."

Important point: The M2C intellectuals have all agreed on definitions that interpret the text of the Book of Mormon to fit Mesoamerica.

That's all fine. Seriously, I'm not saying they are wrong. The only thing the prophets have taught for sure is that Cumorah is in New York. Everything else is open to discussion and consideration.

Still, their interpretation is difficult to fit in the real world.

Hence, the BYU/CES fantasy maps, which apply the M2C definitions to create a mythological fantasy map with the hourglass shape.

This conflation of different terms into one meaning leads Brother Sorenson to make statements such as this: "The adjective narrow is, of course, a subjective term. We cannot establish absolute limits on the basis of such a term alone. The account of Limhi's exploring party establishes that a party of 'diligent men' could pass twice through the "narrow neck" without realize the fact. This clearly says something important about how 'narrow' the neck was and was not."

The footnote to this sentence reads in part "It would have been possible for Limhi's explorers to pass through the Isthmus of Tehuantepec without detecting that it was a 'neck' at all."

While I'm not saying M2C is wrong, we have to recognize that when our best M2C intellectuals reach the conclusion that "narrow" could mean 118 miles across, we might have a problem with credibility.

To be sure, Brother Sorenson identifies a feature within the "narrow neck" as the "narrow pass or passage" (conflating those terms). It is an "elevation" of sandstone and gravel "that runs east-west, often forming a distinct ridge... this feature qualifies in every respect as the narrow pass of the Book of Mormon. When commander Mormon considered this ridge a 'narrow passage,' he certainly got it right in saying that if his Nephite army could hold it, the Lamanites from across the river could "not get possession of any of our [northward] lands" (Mormon 3:5)."

This is a reasonable interpretation that could be applied to dozens, or hundreds, of sites in the Western Hemisphere. What makes it fit in Mesoamerica is the separate interpretation of "narrow" meaning 118 miles in width.

IOW, to make the Book of Mormon text "fit" in Mesoamerica, we have Brother Sorenson and CES/BYU using a flexible interpretation of "narrow" that ranges from ridge suitable for foot traffic to an isthmus 118 miles wide.
_____

For decades, I believed what Brother Sorenson and the other members of the M2C citation cartel taught, so I understand how alluring M2C can be.

And, actually, I have no problem with people continuing to believe M2C. People choose to believe what they want and then rationalize it; we've just seen how easy it is to persuade oneself that a 118-mile-wide isthmus is "narrow."

I offer my perspective not to persuade you of anything, but to give you additional information so you can make your own informed decisions.
_____

FWIW, here's how I approach the text.

I ask myself, does it make more sense for the term "narrow" to apply to a geographical feature less than a mile wide, as Brewster used the term, or to be about 118 miles wide, as Sorenson and CES/BYU use the term?

Does it make more sense to interpret Book of Mormon terminology according to:

(i) the ordinary usage of the terms around the time (1779-1829) and place (New York area) where Joseph used them when he translated the text, or

(ii) the usage supplied by Mesoamerican scholars working in Utah about 180 years after Joseph translated the text?

The phrase "narrow pass" occurs three times in the Book of Mormon, but not in any other scriptures.

Results of search for "narrow pass" on lds.org.

If you look carefully at the usage of the phrase (see the verses below), you see that each usage is unique.

1. the narrow pass which led by the sea into the land northward (Alma 50:34) [Note: the qualifier "by the sea" implies there was at least one other "narrow pass" that people were familiar with. Here, the Nephite army headed the people of Morianton who were marching to the borders of the land Desolation.]

2. the narrow pass which led into the land northward (Alma 52:9) [Note: this passage makes no reference to the sea. If it referred to the same pass as the one in 50:34, it wouldn't make sense; i.e., the 50:34 pass was between two seas. Fortifying the pass would not prevent invasion because the Lamanites could simply use boats to bypass the fortification. Plus, this chapter involved events two years after chapter 50 and doesn't mention the land Desolation.]

3. the narrow pass which led into the land southward (Mormon 3:5) [Note: this was in a different context and hundreds of years after the Alma references]

I'm not saying it is "right" or "wrong" to interpret these passages are referring to the same feature or to different features. I'm suggesting that we need to ask ourselves these questions and not defer to someone else's "consensus" interpretations.

Below are the verses in the Book of Mormon containing the term "narrow pass."

34 And it came to pass that they did not head them until they had come to the borders of the land Desolation; and there they did head them, by the narrow pass which led by the sea into the land northward, yea, by the sea, on the west and on the east.

9 And he also sent orders unto him that he should fortify the land Bountiful, and secure the narrow pass which led into the land northward, lest the Lamanites should obtain that point and should have power to harass them on every side.

5 And it came to pass that I did cause my people that they should gather themselves together at the land Desolation, to a city which was in the borders, by the narrow pass which led into the land southward.