One obstacle to consensus is lack of awareness of bias. 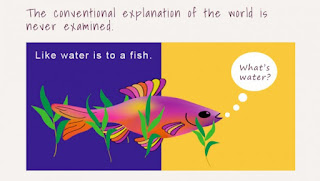 M2C is so pervasive that most LDS scholars don't even realize how deeply it has permeated their worldview. Like a fish that doesn't know what water is until it is caught and yanked into the atmosphere, LDS scholars take M2C for granted and never challenge their assumptions.

I've shown examples of this from the Joseph Smith Papers before, but it's been a while so it's time to look at them again, along with some new examples.

The first one is a map. You can see it here:

This is the map and explanation: 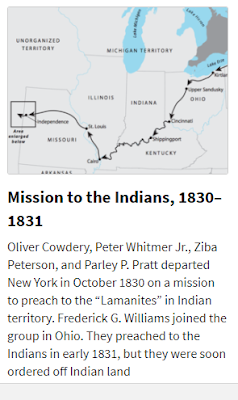 Notice the heading: "Mission to the Indians."

The headings to D&C 28, 30, and 32, which were the revelations calling these brethren on their mission, reflect the language used in the revelations.

We don't read about a mission to the Indians. Instead, we read this:

D&C 30 - 5–8, Peter Whitmer Jr. is to accompany Oliver Cowdery on a mission to the Lamanites

D&C 32 - 1–3, Parley P. Pratt and Ziba Peterson are called to preach to the Lamanites and to accompany Oliver Cowdery and Peter Whitmer Jr.

The heading to D&C 32 even says this:

Great interest and desires were felt by the elders respecting the Lamanites, of whose predicted blessings the Church had learned from the Book of Mormon.

According to M2C, the "real" Lamanites are the Mayans, who have little genetic or anthropological connection to the tribes in the Northeastern U.S.

Yet the Lord designated the tribes in New York, Ohio and the Midwest as Lamanites. To this day, these are the only people formally designated by revelation as Lamanites.

Notice how, in the explanation of the map, the editors of the Joseph Smith Papers decided to put the scriptural language in quotations. This frames it as a folk tradition, as if to say, the so-called Lamanites. Meanwhile, the heading, in much larger print, identifies the people simply as Indians.

I realize this may seem a subtle, nit-picking complaint, but it is typical of how the editors of the Joseph Smith Papers are rewriting Church history to accommodate M2C.