Literally everything you read about M2C is confirmation bias.

When we analyze what these M2C intellectuals are saying, we realize why so few people in the world take the Book of Mormon seriously. 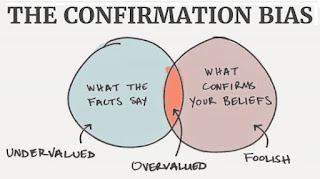 M2C is a major impediment to missionary and reactivation work. We can remove the impediment and give people everywhere a fair chance to accept the Book of Mormon, but only if we recognize what these M2C intellectuals are doing.

M2C scholars have a list of justifications for their repudiation of the prophets.

Among the rationalizations are these "correspondences" between ancient Mayan civilization and the Book of Mormon:

1. Cities.
2. Flags, banners, etc.
3. Volcanoes.
4. Cutting off arms.
5. "Requirements" from the text, such as these from BMAF/Book of Mormon Central America:
http://bmaf.org/about/why_mesoamerica

BMAF supports a Mesoamerican context for the major Book of Mormon sites. Other locations may meet some of the following criteria, but only Mesoamerica meets all these elements required by the book itself.  This list of criteria is not a cafeteria list.  Any Book of Mormon lands proposal must be able to demonstrate all.

Most people outside the M2C bubble easily recognize the circular reasoning here. The M2C intellectuals concoct a set of "criteria" based on Mesoamerica, not the text, and then transform these "criteria" into requirements. Let's look at each one, starting with the BMAF list.
_____

The "narrow neck of land" is mentioned exactly once, in Ether 10:20. It's a description of the location of a great Jaredite city. But M2C conflates this passage with other passages that use different terms.

Nowhere does the text say "a major river" runs south to north. That said, there is a north-flowing river right in North America that M2C intellectuals don't know about.

A "high civilization" is ubiquitous in human history, including in North America.

The Book of Mormon never claims there were millions of Nephites. The largest enumerated army was only 42,000 (Mormon 2:9), and this was after the Nephites had been driven out of their lands and were collected together in one body. It was a time of blood and carnage, a time for "all hands on deck." Plus, we can look at the Bible for comparison. The Book of Mormon refers to a few places as "great cities." One is Jerusalem (1 Nephi 1:4; 2:13; 10:3; 11:13), which had a population of only around 25,000 when Lehi lived there. There is the "great city" Zarahemla. There is the great city of Ammonihah (Alma 16:9). There is Amulon's great city also called Jerusalem (Alma 21:2). And there are unnamed "great cities" round about (Helaman 7:22). These suggest a Nephite population of a couple of hundred thousand at most. Of course, the Nephite population could have been much larger, but there's nothing in the text that requires or even implies that. (Ether 15:2, which refers to two millions of mighty men who had already being slain, probably refers to the entire history of Coriantumr's people because Coriantumr was reflecting on what Ether had told him.)

The written language was expressly not Mayan, and from Enos through Moroni, the prophets explained that the Lamanites sought to destroy the Nephite records. That's why Mormon had to hide them in the depository in the hill Cumorah. Any society with abundant ancient written records cannot, by definition, be a Nephite society.

Calendars and dating systems are ubiquitous in human society. In North America, ancient people created earthworks that aligned with celestial events for this purpose.

Systems of weights and measures are ubiquitous among humans.

Cement is mentioned only briefly in Helaman 3 because the Nephites preferred to build with wood and earth. The text never mentions building with stone and cement, only with wood and cement. The only known Nephite cement is the material Moroni used to construct the stone box on the hill Cumorah in western New York.

Most human societies feature works of precious metal and stone, including those in North America.

Warfare and fortifications are ubiquitous among human societies, including in North America.

Now let's look at the other items.

1. Cities. The Book of Mormon refers to cities, villages and towns. What's the distinction among these terms?

When we assess Book of Mormon terminology, we look at the 1828 Webster's Dictionary and the usage in the King James Bible (references at the end of this post).

A "city" is a collection of buildings protected by a wall. (Towns and villages lacked walls.) In England, it was a community that had a bishop and a cathedral. This definition is interesting because there were seven churches in the land of Zarahemla, which the text says are "many churches" (Mosiah 25:22-23). Does that mean that "many cities" are actually "seven cities" or an equally small number? In Alma 51:26, a list of six cities is called "many cities."

We can't know for sure what the Nephites considered a city, or how many cities there were. But we do know that the indigenous people in North America built walls of wood and earth around their communities, which qualifies as cities, and there were many of these.

2. Flags, banners, etc. The Book of Mormon refers to the title of liberty, and Mayan culture also had flags or banners. But what human societies does not have flags or banners?

4. Cutting off arms. There are Mayan descriptions of cutting off arms. But this is a widespread practice in human societies. Trophy taking is ubiquitous among human societies. It's an ancient custom. Arm-taking specifically has been found in France (https://www.ancient-origins.net/news-history-archaeology/pit-amputated-arms-france-6000-years-ago-suggest-war-and-trophy-taking-020651), among the Timucua Indians of Florida, etc. Herodotus described the practice among the Scythians. It's part of the mythology of the Ossetians (Caucasus mountains). It still occurs today among tribal wars in Africa. In ancient Egypt, they cut off arms to prove to the Pharoah how many enemies they killed, until the Pharoah ordered them to produce genitals to get a more accurate count (I've seen the stone engraving of amputated genitals near Karnak). Even in the Afghan war, the U.S. military collected body parts to get counts of the enemy dead. They Cheyenne Indians identified themselves with a sign meaning "cut arms," referring to a practice of cutting strips of skin from their arms as a sacrifice, which has ancient origins. In the Book of Mormon there is only one account, and it was not even part of a war; Ammon was "disarming" his enemies because that was the only way to stop them. We don't have any accounts of Nephites or Lamanites severing and collecting arms as war trophies. But we do have scalping (Alma 44) specifically as a war trophy, a common practice among the North American Indians that the Lord designated as Lamanites.

You can do the same analysis for any of the "correspondences" cited by M2C intellectuals.

This is not to show that the M2C intellectuals are "wrong."

The point is, these "correspondences" are illusory, and thus not an adequate justification for repudiating the prophets about the New York Cumorah.
_____

VIL'LAGE, noun A small assemblage of houses, less than a town or city, and inhabited chiefly by farmers and other laboring people. In England, it is said that a village is distinguished from a town by the want of a market.
In the United States, no such distinction exists, and any small assemblage of houses in the country is called a village
TOWN, noun
1. Originally, a walled or fortified place; a collection of houses inclosed with walls, hedges or pickets for safety. Rahab's house was on the townwall. Joshua 2:15.
A town that hath gates and bars. 1 Samuel 23:7.
2. Any collection of houses, larger than a village. In this use the word is very indefinite, and a town may consist of twenty houses, or of twenty thousand.
3. In England, any number of houses to which belongs a regular market, and which is not a city or the see of a bishop.
A town in modern times, is generally without walls, which is the circumstance that usually distinguishes it from a city.
In the United States, the circumstance that distinguishes a town from a city, is generally that a city is incorporated with special privileges, and a town is not. But a city is often called a town
CITY, noun
1. In a general sense, a large town; a large number of houses and inhabitants, established in one place.
2. In a more appropriate sense, a corporate town; a town or collective body of inhabitants, incorporated and governed by particular officers, as a mayor and aldermen. This is the sense of the word in the United States. In Great Britain, a city is said to be a town corporate that has a bishop and a cathedral church; but this is not always the fact.
Village - a small assemblage of houses, less than a town or city