This is 2018, but Orwell's observation remains as insightful now as it was when he wrote 1984. Except now it is the Correlation Department of the Church that is controlling the past--and converting Church history by repudiating the prophets.

I mentioned this example in another post that was too long for most people to read. I'm putting a key point here because it's not possible to reach consensus when the Correlation Department suppresses important facts of Church history to change the narrative to support M2C (the Mesoamerican/two-Cumorahs theory of Book of Mormon geography).
_____

A good example of the work of the Correlation Department is the April issue of the Ensign. 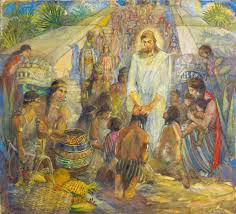 On the inside back cover is Minerva Teichert's painting, "Christ Visits the Nephites." This depicts Christ appearing at a Mayan temple, complete with the Mayan temple of the feathered serpent from Teotihuacan.
The painting is found in the Church History web page, here:
https://history.lds.org/exhibit/-christ-in-the-americas-exhibit?lang=eng#mv9
Incredibly, the web page assigns this title: "Christ Blesses the Nephites at the Bountiful Temple," with a reference to 3 Nephi 11:7. Thanks to the Correlation Department, we have a direct identification of the Nephite Bountiful Temple as a Mayan temple.