Futility of focusing on the text--narrow neck of land edition

I hope that in 2018 members of the Church can finally reach a consensus--achieve unity--on at least one aspect of Book of Mormon historicity/geography. We should all be able to agree that the Hill Cumorah is in New York.

To do so, we will have to overcome a major stumbling block put in place by LDS intellectuals.

These LDS intellectuals seek to figure out Book of Mormon geography by focusing exclusively on the text. This approach naturally appeals to their intellectual arrogance and allows them to ignore and reject what the prophets and apostles have taught about Cumorah.

I'm all in favor of seeking to interpret the text, but not if our basic premise is that Joseph Smith, Oliver Cowdery, David Whitmer, Brigham Young, Wilford Woodruff, James Talmage, Joseph Fielding Smith, Marion G. Romney, and so many others were wrong about Cumorah.
_____

As for reaching consensus and eliminating contention, the approach of these intellectuals is exactly the opposite of what Christ taught in 1 Nephi 11-12. The Lord didn't encourage us to heed the intellectuals; he said, "Blessed are ye if ye shall give heed unto the words of these twelve whom I have chosen from among you to minister unto you."

My favorite example was the "conclave" of LDS scholars who met to decipher the text, which I discussed here: http://www.bookofmormoncentralamerica.com/2016/08/the-council-of-springville.html. These intellectuals actually believe that members of the Church should heed them. This mentality is right out of the New Testament (Matthew 23).

That's why these latter-day scribes and Pharisees reject Letter VII and all the prophets and apostles who have specifically endorsed it.*
_____

Today I want to give another example of the confusion that is inherent in the approach taken by these intellectuals. It involves the "narrow neck of land."

Here is a typical approach to the "narrow neck of land."


The Narrow Neck of Land

The narrow neck of land, mentioned repeatedly in the Nephite record (Alma 22:32; Alma 50:34; 52:9; Hel. 4:7; Morm.3:5; Ether 10:20), is the key to Book of Mormon geography. Most researchers consider it to be an isthmus which connects the land southward and the land northward. If this geographic feature could be identified it would solve the riddle of Book of Mormon lands, and then all else would naturally fall into place. Many different possibilities have been suggested, from the Isthmus of Panama to a penisula between two of the Great Lakes. However, in my opinion all of the suggested sites fail to meet the criteria set forth in the Book of Mormon.

Notice the premise, which I bolded. The author claims all of these passages refer to the same geographic feature. I call this the "unitary interpretation."

This is a common interpretation that the non-New York Cumorah advocates use. It's one of the main reasons for their confusion. They are trying to find a real-world geographical feature that fits all of these descriptions.

My favorite example of this confusion is currently being taught at BYU to students who trust their professors to teach them the truth.

The professors don't teach the students what the prophets and apostles have said. Instead, they have concocted an "abstract" map that crams these verses into a fantasy land, which you can see here.

A lot of people simply accept what these intellectuals teach without thinking about it for themselves.

For many years, I did the same. I was persuaded by my BYU professors that we were "sophisticated" because we were working with PhD archaeologists, linguists, geologists, etc., instead of relying on the naive speculations of a bunch of 1830s farmers (who happened to be ordained prophets and apostles, but were merely expressing false opinions about Cumorah)

But then I re-read the text and discovered that these verses describe different features. They were written at different times, from different perspectives, and even used different terminology.

Look at what the text actually says:

Alma 22:32
32 And now, it was only the distance of a day and a half’s journey for a Nephite, on the line Bountiful and the land Desolation, from the east to the west sea; and thus the land of Nephi and the land of Zarahemla were nearly surrounded by water, there being a small neck of land between the land northward and the land southward.

Alma 50:34
34 And it came to pass that they did not ahead them until they had come to the borders of the land Desolation; and there they did head them, by the narrow pass which led by the sea into the land northward, yea, by the sea, on the west and on the east.

Alma 52:9
9 And he also sent orders unto him that he should fortify the land Bountiful, and secure the narrow pass which led into the land northward, lest the Lamanites should obtain that point and should have power to harass them on every side.

Helaman 4:7
7 And there they did fortify against the Lamanites, from the west sea, even unto the east; it being a day’s journey for a Nephite, on the line which they had fortified and stationed their armies to defend their north country.

Mormon 3:5
5 And it came to pass that I did cause my people that they should gather themselves together at the land Desolation, to a city which was in the borders, by the narrow pass which led into the land southward.

Ether 10:20
20 And they built a great city by the narrow neck of land, by the place where the sea divides the land.

We have a small neck, a narrow pass which led by the sea, a narrow pass that doesn't mention the sea (Alma 50:34 and 52:9 could be referring to the same feature, but not necessarily), a line, a narrow pass described hundreds of years after the Alma reference, and a narrow neck of land.

I'm not saying these cannot all refer to the same feature, but as a rule of construction, a reader should assume authors use different terms to refer to different things. For example, a "narrow neck" commonly refers to a water feature. That's why Ether 10:20 specifies that it was a "narrow neck of land."

Throughout the Book of Mormon text, authors are writing from different locations at different times. To assume each of these references describes the identical feature is to impose an interpretation that the text does not require or even suggest. Not impossible, but not likely, either.

Certainly, this strained unitary interpretation is not so mandatory that it justifies rejecting the words of the prophets and apostles about the location of Cumorah.
_____

You see from the above citations that the term "narrow neck of land" is used only once in the entire text, in Ether 10:20. (Whenever people ask me where the "narrow neck of land" is, I always say it's in Ether 10:20, because that's the only place it appears. Some Mesoamerican believers doubt me because of what they've been taught, but when they check for themselves, they realize how much they've been indoctrinated.)

The term "narrow neck of land" is inherently subjective, anyway. Here's a great example a reader sent me.

Ron Chernow recently published a book titled Grant, about Ulysses S. Grant. At Kindle location 9161, Chernow writes, "[Gen Beuregard]...driving him [Gen Butler] back down the river to a thin neck of land formed by the confluence of the James and Appomattox rivers."

To what geographic feature is he referring? 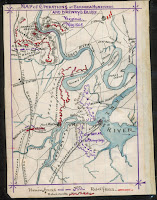 Here's a map drawn in 1864 that illustrates the feature. You can see it at the Library of Congress here:
https://www.loc.gov/resource/gvhs01.vhs00178/

The confluence of the rivers is south of Richmond, Virginia.

(As an aside, the town built at the confluence happens to be named Hopewell. City Point, the oldest part of Hopewell, was settled in 1613. Hopewell/City Point "is the oldest continuously inhabited English settlement in the United States, Jamestown no longer being inhabited.")

It helps to see this map in more detail, so here's a close-up. 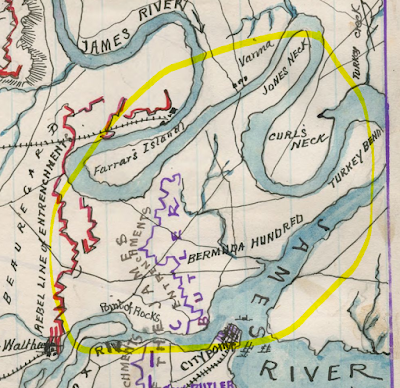 The part I've highlighted is the "thin neck of land" described by Chernow.

Notice that the Civil War era cartographer (Robert Knox Sneden, 1832-1918) labeled two features: Jones Neck and Curl's Neck. These are both narrow necks of land, separate from the "thin neck of land" described by Chernow.

By these applications of the term "narrow (or thin) neck of land," we have three features just in this one area.

I like to imagine what kind of maps our friends who promote the Mesoamerican/two-Cumorahs theory (or the fantasy BYU map) would come up with based on Chernow's description.

Without an actual map, and without our common knowledge about the Civil War and the names of these rivers, these intellectuals would be classifying Chernow's "thin neck of land" as yet another instance of the infamous "narrow neck of land" that conflates all the descriptions in the Book of Mormon text of different features. Our LDS intellectuals would put the U.S. Civil War somewhere in Mesoamerica.
_____

By now, I hope it's obvious that the approach taken by the promoters of the Mesoamerican/two-Cumorahs theory is nonsense.

Actually, this is obvious to most LDS--except to the intellectuals who keep promoting this stuff. They are so steeped in Mesomania that they "can't unsee it," as they have said.

They can continue to conduct their conclaves and debate among themselves the meaning of the various passages of the text.

But I hope the rest of us don't mistake their ruminations as anything but what they are: the futile musings of blind guides who strain at a gnat and swallow a camel. I.e., they strain at Letter VII and swallow Mesoamerica.

As I wrote at the beginning of this post, I'm all in favor of seeking to interpret the text, but not if our basic premise is that Joseph Smith, Oliver Cowdery, David Whitmer, Brigham Young, Wilford Woodruff, James Talmage, Joseph Fielding Smith, Marion G. Romney, and so many others were wrong.

How about if we all, as members of the Church, agree that these prophets and apostles were not wrong, but instead they were putting us on a course that would--and hopefully will--lead to unity and a great understanding of, and appreciation for, the Book of Mormon in 2018.


_____
* I have previously discussed the various rationales for rejecting Letter VII here. I've addressed the archaeological objections as well in several posts, such as this one.
Posted by jonathan3d at 8:35 AM