Someone is wrong on the Internet 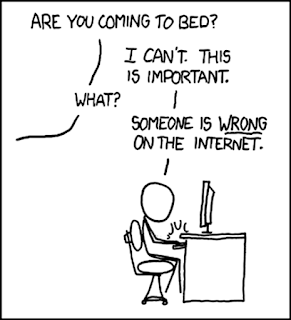 Is it possible to resolve anything on the Internet?

Is it possible to reach a consensus on the Internet?

Then why write and read blogs?

For me, blogs are useful records of the things I'm working on, what I read, and my thoughts, a sort of easily accessible journal that, apparently, other people are interested in. So far, there have been about 150,000 hits on my blogs and hundreds of people read them every day, mostly from the U.S. but also from many other countries around the world.

Marketing experts know it takes many impressions to influence thinking and behavior. Most people are not going to change their minds even in the face of new information, but a few do. Impressions can accumulate until a tipping point can be reached. One blog post might make the difference, like the last snowflake that causes an avalanche.

There's a clever post about the challenge of persuasion on another blog, here. Ardis Parshall writes:

"This classic xkcd webcomic (#386, Duty Calls) captures the common online absurdity of exerting great effort to prove to a stranger that he is wrong and you are right about something that doesn’t matter to anyone. I mean, who would do something like that?"

So is there a reason to blog other than journaling?

As I've discussed many times, one of the biggest obstacles to reaching consensus in any field is lack of open communication and exchange of ideas. Whenever possible, people tend to prefer confirming their biases as opposed to changing their minds. This may be even more true of scholars, academics and educators than of the general public, for the obvious reason that the intellectuals have much more invested in their beliefs.

To confirm their biases, scholars, academics and educators tend to establish and perpetuate closed systems. A college campus, for example, is a closed system; faculty are hired based on shared academic assumptions and credentials, and students are admitted based on shared objectives and beliefs in the value of the established academic assumptions and credentials.

The LDS citation cartel is a prime example, of course, since the cartel's concept of "peer review" is essentially "peer approval" by a small group of like-minded academics who resist intrusion (or even participation) by outsiders who challenge their shared assumptions.

Because the academic citation cartel exists to confirm the shared biases of cartel members, the cartel is able to impose their assumptions and beliefs on others through the educational system. Their assumptions about Church history (i.e., that Joseph and Oliver were confused speculators who misled the Church about the New York Cumorah) and about Book of Mormon geography (i.e., that Mesoamerica is the only viable setting) have come to dominate LDS thought because the cartel members have successfully excluded alternative assumptions from BYU and CES. Consequently, everyone is taught the same assumptions, and they continue ad infinitum.

The Internet is one of the only ways to bypass the cartel and communicate new ideas. Cartel members understand this, which is why the citation cartel exists in the first place. They know that most members of the Church, when faced with a choice between the academics on one hand and Joseph and Oliver on the other, will choose Joseph and Oliver.

Given a choice, most members of the Church would reject the two-Cumorahs theory. For that reason, the citation cartel relegates the two-Cumorahs theory to isolated comments in academic writings and subliminal teaching such as the display on Temple Square and the images in the missionary editions of the Book of Mormon.

I doubt this post will be the snowflake that causes an avalanche, but hopefully it will add to the accumulation of ideas that weighs on the citation cartel. Eventually, I trust, a consensus about Church history and Book of Mormon geography will develop.
Posted by jonathan3d at 7:57 AM