I've been discussing nuclear energy risks with an environmental science class and the topic of the U.S. came up. 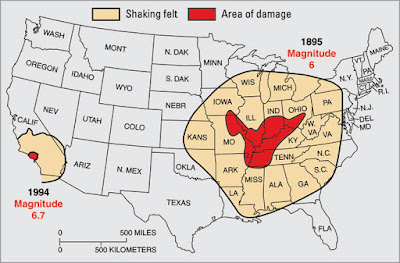 This map from the US Geological Survey is interesting from a Book of Mormon perspective. Here's the explanation from that site: "n the Central and Eastern United States, earthquakes are felt over a broader area than comparable-size quakes in the Western United States because of differences in geology. Although only of magnitude 6, the earthquake that occurred near Saint Louis in 1895 affected a larger area than the 1994 magnitude 6.7 Northridge, California, quake, which caused $40 billion in damage and economic losses and killed 67 people. A repeat of the 1895 earthquake could prove disastrous for the Midwest, where structures are not as earthquake resistant as those in California."

Those of us who believe the Book of Mormon took place in North America (Moroni's America, Heartland, etc.) think the land of Zarahemla was roughly today's Illinois and Iowa, while the land Bountiful was roughly Indiana and Ohio. The Lamanite land southward was below the Ohio River, with the city of Nephi in southeastern Tennessee.

Most of the Nephites lived along rivers (or seas we call lakes today). It's pretty easy to see how an earthquake in this area would have caused the damage described in 3 Nephi, when combined with the tornadoes.

There is a lot more information here: http://showme.net/~fkeller/quake/maps.htm

I've discussed all of this before in more detail, but this was a reminder and I posted it here for further consideration.