Here is a graphic representation.**

This grey bar is the setting for the Book of Mormon as described by the text.

It is consistent throughout--a constant shade of grey. Anyone can see the consistency in the bar. If you're not sure, download the image and test it in Photoshop or any other imaging software.

The grey bar is like the ideal abstract map; i.e., theoretically, everyone reading the text should be able to come up with the same idea about the internal geography of the Book of Mormon.

But of course, that's not what happens in the real world. No two people reading the text will come up with the same abstract map. It's impossible, actually. The distances and directions given in the text are so vague that no two people can independently think of exactly the same interpretation. For example, one person's idea of "northward" varies from the next person's idea because there are 180 degrees (or more) of range one could think of as "northward."

Even when a group of people come together to reach a "consensus," their conclusion will differ from another group of people. This is why we have dozens of proposed settings for the Book of Mormon.

People bring their own backgrounds and experiences to the text. They have different perspectives. This is shown in the next illustration: 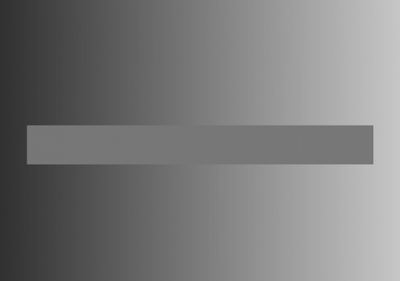 The bar in the center of this image is the same grey bar I put at the beginning of this blog. Now, with the gradient background, the bar looks lighter on the left and darker on the right, even though, in fact, it is one constant shade of grey.

The grey bar is like Book of Mormon geography; although it is internally consistent, it looks different to different people depending on their perspective. This is how we end up with theories that the Book of Mormon took place in Chile, Peru, Colombia, Panama, Guatemala, Mexico, Baja, New York, Pennsylvania, Ohio, Malaysia, Eritrea, etc. Even among Mesoamerican proponents, there are numerous variations.

So how do we reach consensus? How do we get to the point where we're all seeing the same shade of grey?

Look at the grey bar again and see if you can tell what is different about it here compared with how it appears with the gradient background in the image above.

Yep, you see it. The difference is it has a consistent background. When the background is solid white, the consistency of the grey bar is apparent.

To reach a consensus, we need to have a consistent background against which to view the text. I propose that, for believing Mormons, that consistent background should be the information given by the text itself, by modern revelation and by the teachings of Joseph Smith and Oliver Cowdery. These include a few key points:

1. Both Lehi and Mulek crossed the Atlantic ocean (1 Nephi 18)

2. The Hill Cumorah is in western New York. Period. There are no other "Cumorahs" in the background. (D&C 128 and Letter VII)

3. The plains of the Nephites, mentioned several times in the text, are in Ohio, Indiana, and Illinois. (Joseph Smith's letter from Zion's Camp)

Now, I realize some people will not accept these elements of a consistent background. These elements contradict their traditions. They represent a different paradigm than the one they have promoted for decades. To accept this consistent background would require that they change their perspective and, in many cases, repudiate what they have written.

In other words, it's a test of their objectivity and pursuit of the truth.

I propose that LDS scholars apply the scientific method to the hypothesis that these five elements are a consistent background for the Book of Mormon.

Short of agreeing on a consistent background, the confusion and controversy about Book of Mormon geography cannot be resolved.

When I discovered the whole theory was based on a historical mistake--that the Times and Seasons articles were not written or even approved by Joseph Smith--the Mesoamerican theory unraveled completely. The only thing keeping it going now is decades of tradition among a handful of LDS scholars.

Instead, the text, early Church history, archaeology, anthropology, geology, geography, and linguistics all point to a North American setting.

In my experience, most Church members understand this easily. They are not deeply invested in the Mesoamerican setting; in fact, most of them think it doesn't make much sense anyway. It's not that difficult for them to change paradigms. When they see the North American setting, their questions are answered and their faith in the gospel is enhanced by reaffirming their testimony of the Book of Mormon and Joseph Smith's role as a prophet.

Consequently, I invite anyone interested in the Book of Mormon to read the text with the consistent background I've proposed above. The more people who do so, the sooner we can reach a consensus about Book of Mormon geography--finally.

*Actually, I'm not sure that everyone has the same objective. I like to think we all want to know the truth and we all believe the truth will support the text, but in the last year I've encountered some LDS scholars who seem more intent on defending their past publications than on pursuing the evidence wherever it leads. Just read the Interpreter to see what I mean.

**I adapted this from wikipedia user Dodek, available here: https://upload.wikimedia.org/wikipedia/commons/1/1e/Gradient-optical-illusion.svg
Posted by jonathan3d at 9:16 AM